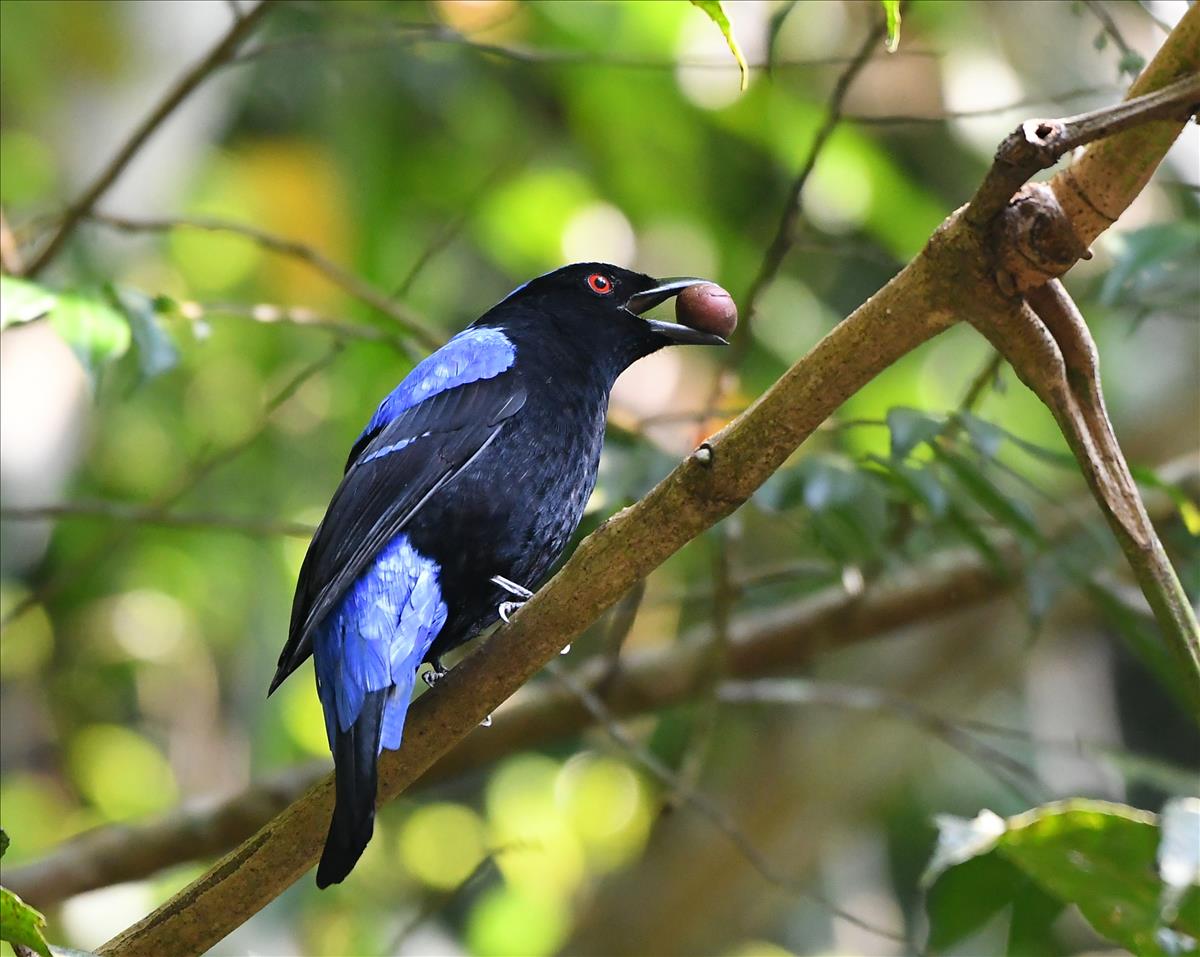 Irena puella is the Asian fairy bluebird. There is another form Irena cyanogaster the Phillipine fairy bluebird. The plumage of the fairy bluebirds is exceptional, with the upperparts being deep rich blue. The Asian fairy-bluebird is sexually dimorphic in its plumage, with the male being much brighter and more colourful than the female; with the crown, hind neck, back and upper tail an iridescent blue and the underside, including the legs and feet, a dark blue or black. Females and first year males are a dull bluish green or purple. They have crimson irises. The bill is slightly curved and is black. It has small, black claws and loosely attached feathers on its rump. There are clines in size differences which can be attributed to Bergmann's rule, with the northernmost populations being larger on average.

As the name suggests, the Asian fairy-bluebird occurs across southern Asia. It is widespread from northeast India to the Himalayan Foothills, Myanmar, and Indochina. They wander according to seasonal abundance of their favourite fruit and are not considered migratory. The range is approximated at 3.72 million cubic kilometers.

They are found in the moist hill forests, lowland evergreen forest, or the deep forest crown.

They are frugivores. Their favourite fruit is figs. They consume flower nectar as well. Normally very quiet birds, however, if a fruiting fig tree is found the whole flock will come to that tree. As young birds they are fed insects by their parents.

Nests are open, tidy and cup-shaped because they are made in young saplings or thin bushes with rootlets and twigs; then camouflaged with moss. The nests are made approximately six metres off the ground. Only the female builds the nest but both sexes are involved in feeding the young. Normally living in small troops, during breeding season the birds break up into mating pairs. They lay two to three greenish eggs marked with brown and grey blotches and streaks. The eggs take 13 to 14 days to hatch and the young are born altricial (born in helpless condition and need parental care). Breeding season occurs between the months of February and April. Males at one year of age are mature enough to mate.

The height of the nest and camouflage provides protection for the nestlings. Although the fairy-bluebirds are highly visible in sunlight they are much less visible in the shade of the forest. The deep colour is provided by specialized naked feather-tip barbs. The call of the Asian fairy-bluebird is a liquid two note Glue-It. They have a powerful, deep and notched bill used for crushing. Fairy-bluebirds will generally eat fruit of a certain size, and will crush larger fruits in order to make them manageable. They forage widely to obtain food.

The fairy-bluebirds are dependent upon fruit producing forests Populations are declining due to habitat destruction, hunting and fragmentation.