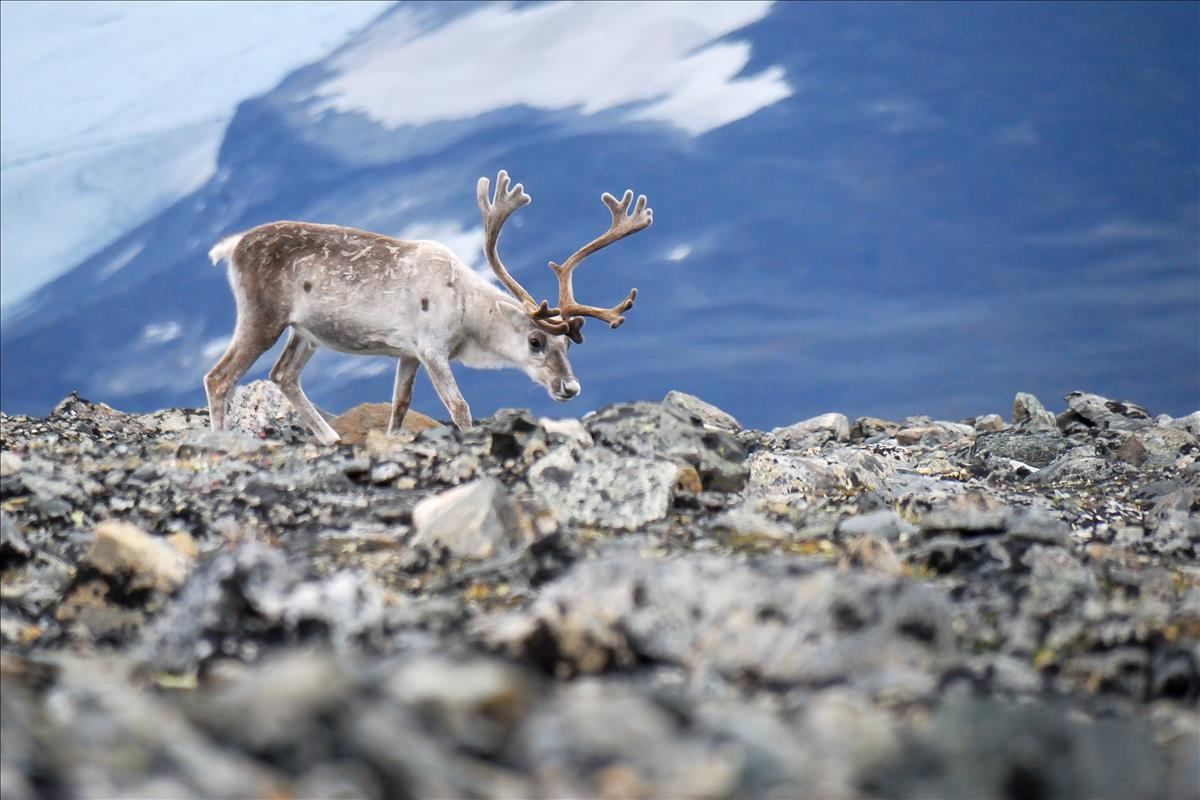 Reindeer, Rangifer tarandus, are referred to as caribou in North America. Collectively they are divided into two major groups: the tundra reindeer (or caribou) with six sub-species and the woodland reindeer (or caribou) with three sub-species. They are all similar, however amongst the tundra group are three small-bodied forms. Rangifer tarandus tarandus, or the European reindeer, is one of these. This European reindeer is of small stature, and is alike in general appearance to other reindeer and caribou; however, coat colour varies with sub-species. This sub-species is light brown in summer changing seasonally to grey-white in winter, with the white areas often present on the neck and belly. The coat has two layers of fur, a dense woolly undercoat and a longer-haired overcoat. They are sexually dimorphic, meaning that males and females look different, which in this case the males are larger. Males have a thick mane of fur around the lower part of the neck. Although both sexes have antlers, male antlers are larger and more complex. The antlers are many pronged, with characteristically curved main stems that sweep back and up from the forehead, then turn forward. They have a long head and rump, and rather long legs. The hooves are broad and rounded, and the tail is short. Reindeer weigh on average 113 kg and stand 120 cm at the shoulder.

Arctic tundra of Eurasia including the Fennoscandia Peninsula of Northern Europe.

European reindeer have differing habitat based on the time of year. In the winter months they travel to evergreen forest areas, and in spring they return to the tundra. There is a natural mass migration between the two areas.

They are grazing herbivores, feeding on a variety of plant matter, particularly grasses in summer and lichen in winter. Grasses, sedges, leaves of willows and birches, lichens, and mosses are all consumed.

Females stay in large herds throughout the year, with single males following the herd at some distance. Males compete for access to females during the fall rut. This period of sexual excitement occurs in October and early November. At this time males joust with each other to determine who is the strongest, and the most dominant males collect several females to mate with. Females are ready to breed at two years and males at three years. They have a gestation period of about 220 days, with the calves being born the following summer. Single births are most common; however, occasionally twins will occur. Newborn calves are precocial, meaning that they are born fairly mature with eyes open and the ability to stand. As such, they are able to suckle minutes after birth and are able to walk within one to two hours. Calves nurse exclusively for their first month, after which they begin to graze. They continue to nurse occasionally through early fall, then they become independent and forage on their own. Life span is approximately 15 years for females and bulls typically live less than ten years in the wild.

They are well adapted to living in cold climates. Reindeer hooves adapt to the season: in the summer, when the tundra is soft and wet, the footpads become sponge-like and provide extra traction; in winter, the pads shrink and become concave, providing a good grip on icy ground. Their hooves are long which act like snow shoes, and the exposed rim of the hoof enables them to dig down through the snow to find lichen. They have a keen sense of smell which allows them to detect food buried deep under snow. The long thick overcoat of hair covers compact bodies, and the individual hairs are hollow and air-filled. They taper sharply helping to trap heat close to the body. This also helps them to become more buoyant when swimming. Veins and arteries in the limbs are positioned closely to allow heat exchange: cold blood returning from the limbs is warmed by the arterial blood coming from the heart. This pre-warmed blood helps to conserve energy. The ears are short and well furred and are kept close to the body out of the cold air. Noses are also specialized; surface area within the nostrils is increased to allow warming of incoming air before entering the lungs. Reindeer are very sturdy, strong animals migrating over long distances. They travel further than any terrestrial mammal. They do not hesitate to swim across lakes and rivers. They communicate amongst themselves through vocal, visual, chemical, and tactile cues.