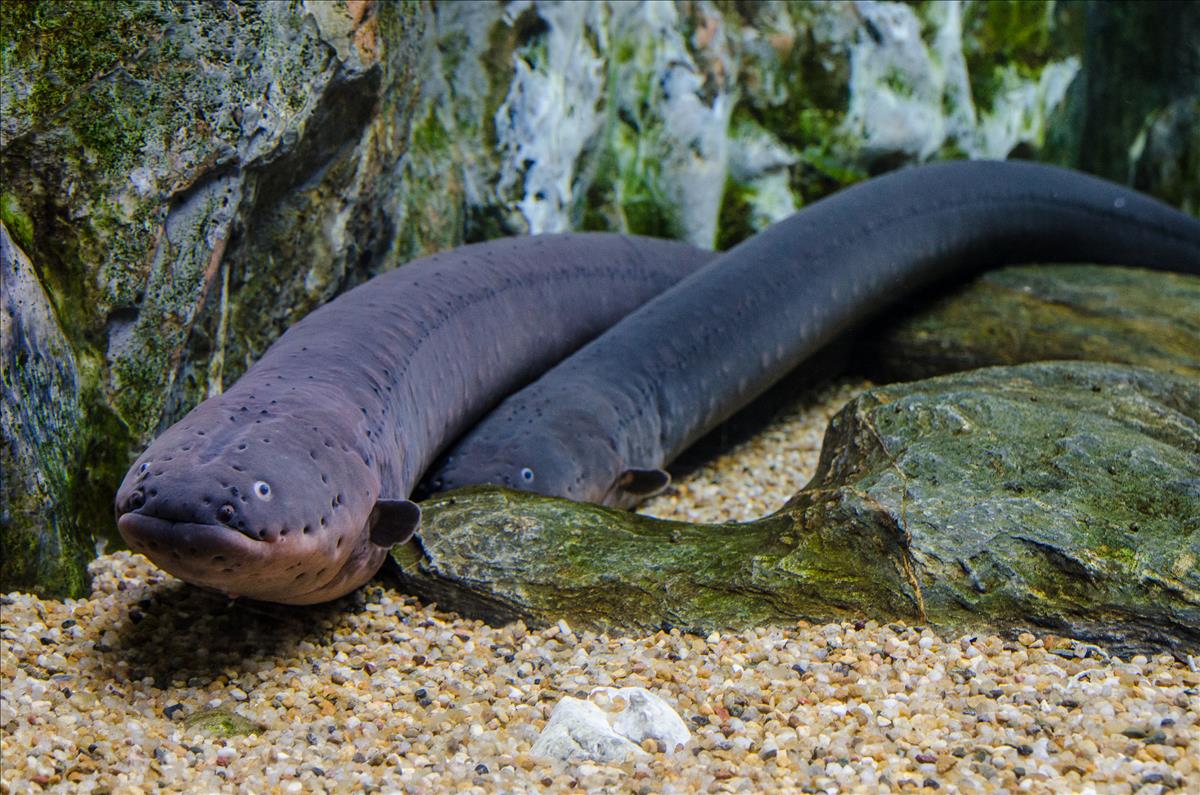 Eel-like fish with electric organs, but is not a true eel. It is actually more closely related to the knife fish. The dorsal and ventral fins are absent. The anal fin is very long, and is united with a caudal fin to form a single fin along the bottom of the body. The scales on this fish are absent. It is a uniform brown colour. The underside of the head and throat of the adult is brilliant orange and the eyes are a shining green. Its visceral organs take up only one fifth of its body length; while the electrical organs make up the remainder of the body length. The electric eel is the most powerful bioelectric generator known and discharges shocks of direct current of up to 600 volts and 500 watts. The electric power is used to navigate, to stun prey and as a form of defense. The species can grow from 1.8 to 2.5 m long, and weigh up to 20 kilograms.

The electric eel is an obligate air breather; it could not survive if unable to come up to the surface for air. At regular intervals, every minute or two, the fish rises to the surface, gulps air into its mouth and then sinks back to the bottom. If denied air it can drown in about ten minutes. It expels air through the opercular opening.

Tropical - freshwater: Shallow, muddy pools along creeks and rivers which typically have low oxygen levels. It is bottom dwelling.

Lives on freshwater shrimp and crabs, but sometimes will eat fish and frogs. The electric eel is toothless and swallows food whole. It does not eat large food items.

Males create nests from their saliva that a female places eggs into. They disappear from their usual Amazonian haunts during the breeding season. Later, when they return, one of the parents takes care of the young until they are 10 to 15 cm in length. During the first few weeks the eel will already have shed its skin once. There can be up to seventeen thousand eggs in one nest.

The electric eel has markedly degenerate gills that play no significant part in its respiration. The uptake of oxygen occurs in the mouth, which is almost entirely lined with papillae (protuberances) that provide a large total surface area for gas exchange. Comparatively little carbon dioxide is released through the mouth; most of it is discharged into the water by way of the skin and the vestigial gills. Experiments have shown that the electric eel is responsive to the oxygen content in the air. When it is subjected to air that is low in oxygen, it speeds up its breathing efforts; when the air is abnormally high in oxygen, its breathing slows down.

In all fishes, the electric organs are derived from muscle cells. The thin, flattened cells of electric organs are known as electrocytes. Each cell is imbedded in a transparent gelatinous material. In the electric eel, the organ is arranged in columns of electroplaques which run longitudinally and can simultaneously discharge within a period of three minutes. Power is released by the central nervous system (voltage as well as intensity). Although the charge lasts only two or three thousandths of a second, it can be repeated up to 150 times an hour without visible fatigue on the part of the eel.
Lying motionless in the water, the eel is usually electrically inert but when it begins to move, it emits small direction finding impulses at a frequency of about 50 per second. An eel two and a half metres long was seen to stun a carp twenty feet away. It can also stun a horse or throw a man on his back. It is not harmed by its own discharge.

The electric eel has few enemies other than humans.