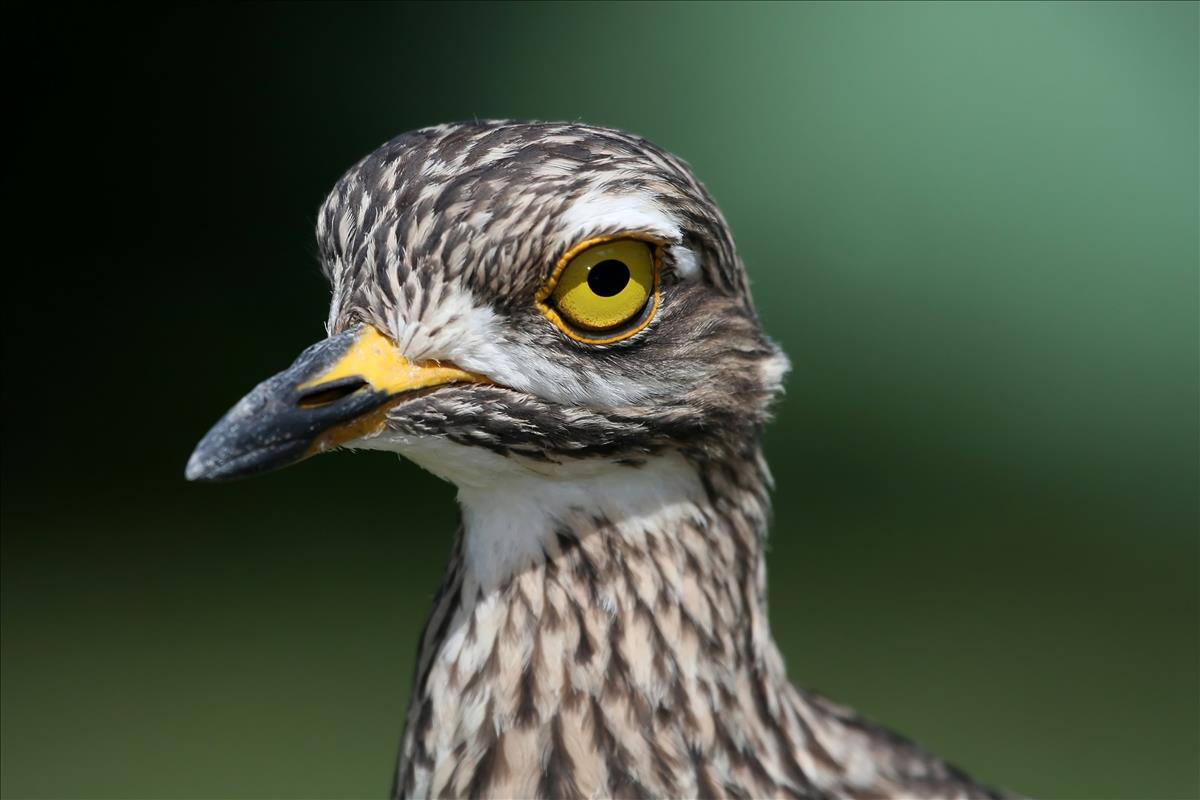 The double-striped thicknee is a medium size bird which received its name from the two stripes above the large eyes. A white stripe encircles the eyes, wide on top and narrow underneath. A black stripe is above the white and both these stripes continue down the sides of the moderately, long, neck. The large, buff coloured head along with the neck are streaked with brown. The broad bill is greyish and approximately 5cm. long. The brown streaked colouring continues over the back and tail which is medium long with narrow, tapering, black tipped, tail feathers. The breast is a mixture of finely streaked black and buff brown; the belly is white. The very scaly, elongated, legs are grey with a tint of yellow. There is a conspicuous thickening of the inter tarsal or heel joint [popularly mistaken as the knee]. The feet have three, forward facing, toes. The sexes are similar. Length is 38 – 51cm.

This thicknee is found in central and South America from Mexico to Brazil as well as the West Indies. Accidentally, they are seen in Texas and Barbados.

Grassy savannah, farmland with dirt tracks, as well as semi to arid areas with sandy soil. They prefer flat topography with a few bushes up to 900 m. in elevation.

When double-striped thicknees are two to three years old they are sexually mature. Courtship involves vocalizations and displays of expanding their wings. After choosing a mate, the pair will both decide on the nesting spot by pointing their bills at different spots on the ground. When the female agrees, she moves onto the spot and scrapes out a slight depression with her feet. Often the site chosen is among animal droppings. Sometimes the pair place small stones or twigs around the periphery. Two eggs are laid which are pale with brownish blotches which both parents incubate. After incubating for 27-29 days the chicks hatch. The hatchlings when born have their eyes open, are covered by downy, pale buff feathers [precocial] After the feathers dry, the chicks leave the nest, although the parents feed them for a short time and they soon learn to find food for themselves. The chicks are born in April to early May.

Being precocial is an adaptation for a ground dwelling species because the chicks are mobile shortly after hatching and they quickly learn about food sources by following their parents. Moreover, they learn to freeze when the parents utter the alarm call and their colouring makes them blend in with the soil. Having both parents involved in incubating the eggs and in feeding the chicks means there is a better chance of survival as the “off duty parent” is often nearby acting as a sentinel. Thicknees have been seen carrying the chicks in their mouth to move them to a safer place [for example if sheep or cattle come near]. The chicks become independent at a young age, which is an adaptation for birds living on the ground. The parents have been seen to stand, facing an intruder, wings outstretched and flapping, neck thrust forward.

The cryptic colouration enables the double striped thick-knees to blend in with the ground as they freeze when disturbed or rest during the day. When resting, these birds have the full length of the tarsus on the ground and the tibia is upright. As well, their yellowish-tinged grey legs blend into the background, causing them to appear as if they are just a head and body moving in space, which would confuse a predator.

They prefer to walk quickly but if necessary they will run and from a run will take off and fly with their legs extended out past the tail which enables rapid, direct flight since the wings are long however they lack maneuverability. When they touchdown, they end up running on the ground after their feet touch the ground.

Since they are crepuscular and nocturnal birds, they feed at that time. Their very large eyes are an adaptation to being active at night. Their thick beaks especially enables the eating of seeds. They may fly to feeding areas; they prefer to hunt for food on unpaved tracks as they can see and catch insects easily. They pick the prey from the ground by walking, then pausing, tilting the head forward which enables binocular vision and enables birds to better judge distances. The omnivorous diet is an adaptation to finding enough food.
In non-breeding season, they congregate in vocal, social, groups during late evening and nights.

Double-striped thicknees are frequently killed at night when they are foraging on dirt tracks or unpaved roads. At times, sheep and cattle crush eggs and farm implements may destroy nests or birds.