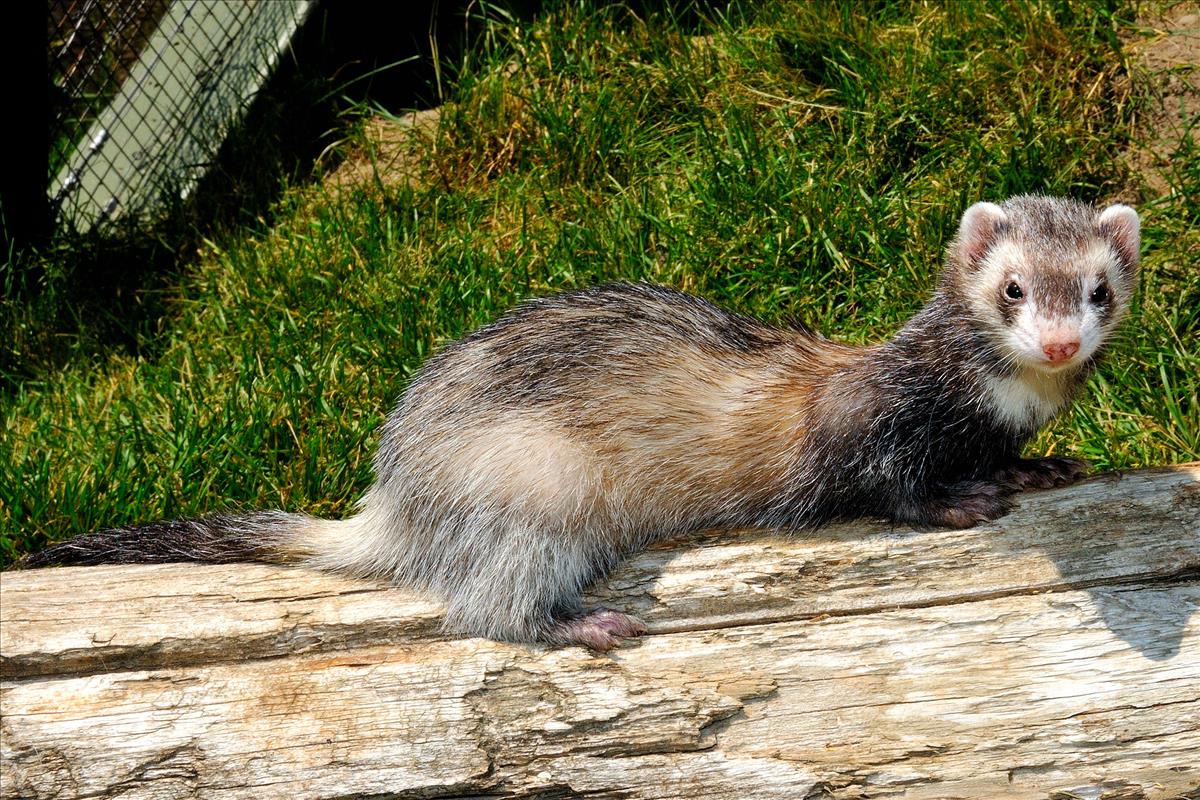 The domestic ferret is generally thought to be a descendent of the European polecat (Mustela putorius). It was bred in captivity as early as the fourth century B.C. They have long slender bodies covered in soft fur. They come in a wide variety of fur colours, which include sable, silver, black sable, albino, dark-eyed white, cinnamon, and chocolate, but the most common colour is sable.

They are sexually dimorphic, which means there are obvious physical differences between the sexes. Adult males may be twice as large as adult females, measuring 38 - 40.6 cm in length, and weighing 0.9 - 2.7 kg. Females weigh 0.3 - 1.1 kg and are 33 - 35.5 cm in length. The average tail length is 7.6 to 10 cm. They have short legs and each foot has five non-retractable claws.

Domestic ferrets are found in captivity in much of the world. Feral populations of domestic ferrets can be found in New Zealand, Australia, USA, Canada, Azores, Sicily, Sardinia, and the Scottish Isles.

They are kept as pets or as working animals in human habitations.

Males will mate with as many females as they have access to and are ready to breed when they develop a discoloured, yellowish undercoat. This discoloured undercoat is caused by an increase in the oil production of the skin. A female in estrus has a swollen pink vulva, which is due to an increase in estrogen. On some occasions, females will go into lactational estrus, which is when the female goes back into estrous while still lactating for the litter that she just had.

Gestation length is about 42 days. Females may have two or three litters per year. Kits are born deaf and have their eyes closed, and they open when they are about five weeks old. They are weaned between three and six weeks of age, but require parental care until they are about eight weeks of age. Females reach sexual maturity at six months of age. Domestic ferrets reach their adult size at one year of age.

They are naturally crepuscular, having activity periods during dawn and dusk. They will often sleep 18 - 20 hours per day. Activity will often change depending on when their owner is around to give them attention. They are playful and fastidious. They will often interact with other pet ferrets, cats, and dogs in a friendly manner. They can be taught tricks and will respond to discipline.

Domestic ferrets use a variety of body language. Some of these behaviors are dancing, wrestling, and stalking. They will dance when they are happy and excited, hopping in every direction. Wrestling is a behavior that involves two or more ferrets. They will roll around with each other, biting and kicking, usually in a playful manner. Stalking is sneaking up on a toy or other animal in a low crouched position. Domestic ferrets have an instinct to habitually urinate and defecate in the same places, and therefore can be trained to use a litter box.

The metabolism of a domestic ferret is very high and therefore they need to eat about 10 times per day. They also have olfactory imprinting, which means that whatever is fed to them for the first six months of their life is what they will recognize as food in the future.

As pets, they can live from 6 - 10 years. There are a few diseases and disorders that can shorten the life of domestic ferrets if not treated. Some of these diseases and disorders include: canine distemper, feline distemper, rabies, parasites, bone marrow suppression, insulinoma, adrenal gland disease, diarrhea, colds, flus, ringworm, heat stroke, urinary stones, and cardiomyopathy.