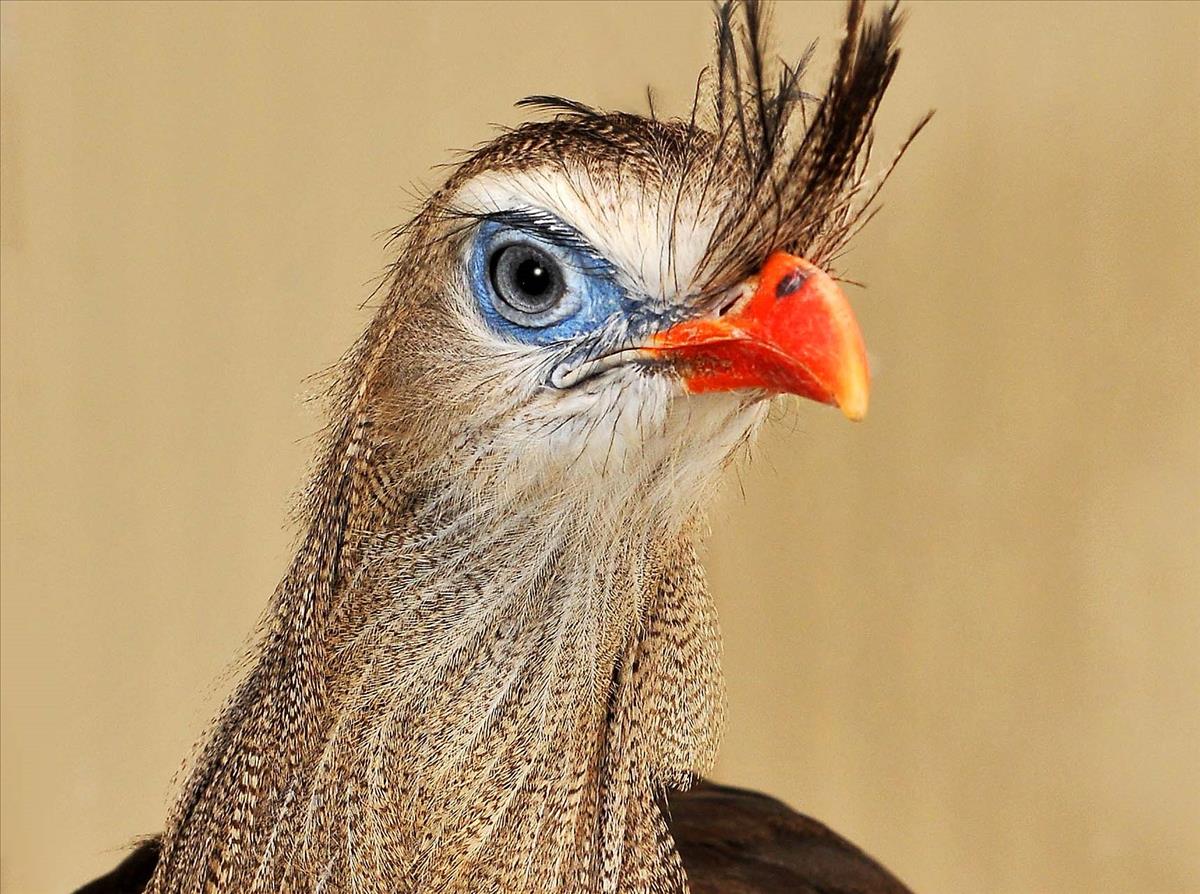 Most of the crested seriemas feathers are soft and loosely webbed particularly on the neck and underparts. A spray of bristly feathers, seven to ten cm high are featured on the forehead. White chin feathers form a scraggly beard that transitions into a more matted look on the throat. Crown feathers are finely vermiculated in brown and tan. Long black eyelashes extend from white eyebrows. Pale-yellow eyes have a pale-blue eye ring surrounded by a pale-blue area of bare skin that extends to the base of the upper mandible where the nostrils are located. The bill is red, short and decurved with a small hook on the upper mandible.

Other than a white belly, the rest of the plumage is finely vermiculated except for the bolder lines of the breast. The neck is grey and tan with elongated feathers that form a low-profile nuchal crest. Wings are short and rounded. Their coverts are light brown. The remainder of the visible wing plumage is darker brown. Flight feathers, which are only visible when the crested seriema flies or displays them, are black with white bands. The tail is also black, tipped in a broad band of white. All of this rests on red, stiltlike legs (hence its alternate name: red-legged seriema). Three short, sharp toes point forwards. The small hind toe is raised and sickle shaped. Females are slightly smaller than the male. Juveniles have dark brown barring on their crown, neck and mantle. Legs and bill are grey.

From central and eastern Brazil south through extreme eastern Bolivia, Paraguay, and western Uruguay to central Argentina. It is most numerous in the cerrado of central Brazil. In Uruguay, it's becoming harder to find.

Savanna of different types: the cerrado of upland central Brazil has been called the richest savanna in the world. Its characterized by grasslands with gallery forests and stream valleys. The caatinga of northeast Brazil is dry shrubland and thorn forest. Somewhat similar is the Chaco of Bolivia, Paraguay and Argentina. In the area where these three countries meet, the crested seriema also inhabits the enormous tropical wetland of the Pantanal.

Although an omnivore, Cariama cristata is decidedly carnivorous. Arthropods like grasshoppers, beetles, ants, and spiders are its' main prey. It also dines on insect larvae, lizards, snakes, rodents, and bird chicks. Occasionally it will eat plant material such as maize, wild fruits, crops, beans, green leaves, and seeds.

In central Brazil, breeding takes place in the rainy season of September to January. In northeastern Brazil, it's February to July. In the southern areas, it's November and December. To attract a mate, the male fans out his flight feathers to one side to display the barring. They also strut with the nuchal crest raised and the bill pointing towards the ground. The pair may squeak to one another. They now build a bulky nest, a rough, round agglomeration of sticks lined with leaves and clay or cattle dung. Since the crested seriema flies as little as possible, the nest is positioned so that the bird can use a series of branches to bound up to it, one to five metres off the ground.

Two or three eggs are incubated, mainly by the female, for 24 to 30 days. Weighing in at 40 grams, a newborn has pale brown down, mottled with dark brown on the back. On the head, the down is long, hairlike and crinkly. In about two weeks, the parents go to the ground and call quietly until the chicks jump down to join them and their life as a pedestrian begins. Juveniles fledge at about one month. They attain adult plumage and weight between four and five months of age.

A solitary bird, the crested seriema feeds alone except during breeding season when mates hunt together or as a family later on. It walks slowly, scanning the ground and low vegetation. On sighting prey, it approaches cautiously until close enough to snag it. Smaller prey is swallowed headfirst. Any large invertebrate is held in the bill and torn up with sharp claws, including the hind sickle claw. Snakes, rats and sometimes bugs are pulverized by being beaten against something solid. Without immunity to snake toxins, it has to kill them quickly.

Since it's always on the ground, its in danger of being preyed upon itself. Its long legs and neck plus an upright stance allow it to be vigilant in the high grasses where it hunts. When something does alarm it, it may try to hide by lying down behind a log. More often it runs away. The species is capable of running 40 km/hr or more. If a predator won't give up the chase, only then does the crested seriema take to the air. A burst of rapid flapping followed by a glide won't get it far, but it need only find a tree or other perch. Sometimes, if cornered, it uses a threat display: while it ruffles its head and neck feathers and calls out, wings are fanned to brandish their barred pattern.

It also forages with horses or cattle to catch insects they stir up or that hang around their dung. In cerrado, agricultural practices make fire a way of life. Fires are a good place to find injured or dead bugs and small invertebrates, and so the seriemas seem to "chase fires".

Families require a fairly big territory and they expend a lot of energy in defending it from other seriemas, primarily by singing. Even a juvenile can sing the song weakly by two or three weeks of age. Most of the time, they sing from a tree, fence or termite mound so that their voice will carry further. Since it carries for kilometers, the crested seriema is more often heard than seen. The song starts with the neck held straight, but its soon bending its head way back. It sings in the early morning with a long series of loud, puppylike yelping. When one bird nears its songs end, its mate will respond. At the same time, distant seriemas start singing. This chorus maintains territories. If an intruder does appear, the family will march toward it singing all the while. On occasion males will engage in combat by jumping up, flapping their wings for balance, and striking at one another with their powerful legs. This noisy struggle goes on until one walks away.

During the day, Cariama cristata rests by sitting on its legs and belly. Dust baths help it get rid of parasites. It also enjoys sunbathing, which it does by seemingly playing dead. It rolls on its side and spreads the upper wing to expose its flank. When defecating, it ruffles its feathers. In the evening, the family roosts high in the trees squatting side by side. Rather than hiding their heads in the backs feathers as most birds do, they keep the head forward with the neck pulled in.

In their southern range, agriculture is taking away the crested seriemas land, which has resulted in their near-disappearance in Uruguay. In Amazonian Brazil however, the cutting down of tropical forests for agriculture is opening up grasslands, expanding their territory. They are hunted for their meat and eggs, which exacerbates their lack of density over much of their range. Farmers try to protect them because of their perceived hunger for snakes and rats though the numbers eaten are exaggerated. The bird trade in Brazil is a localized problem.