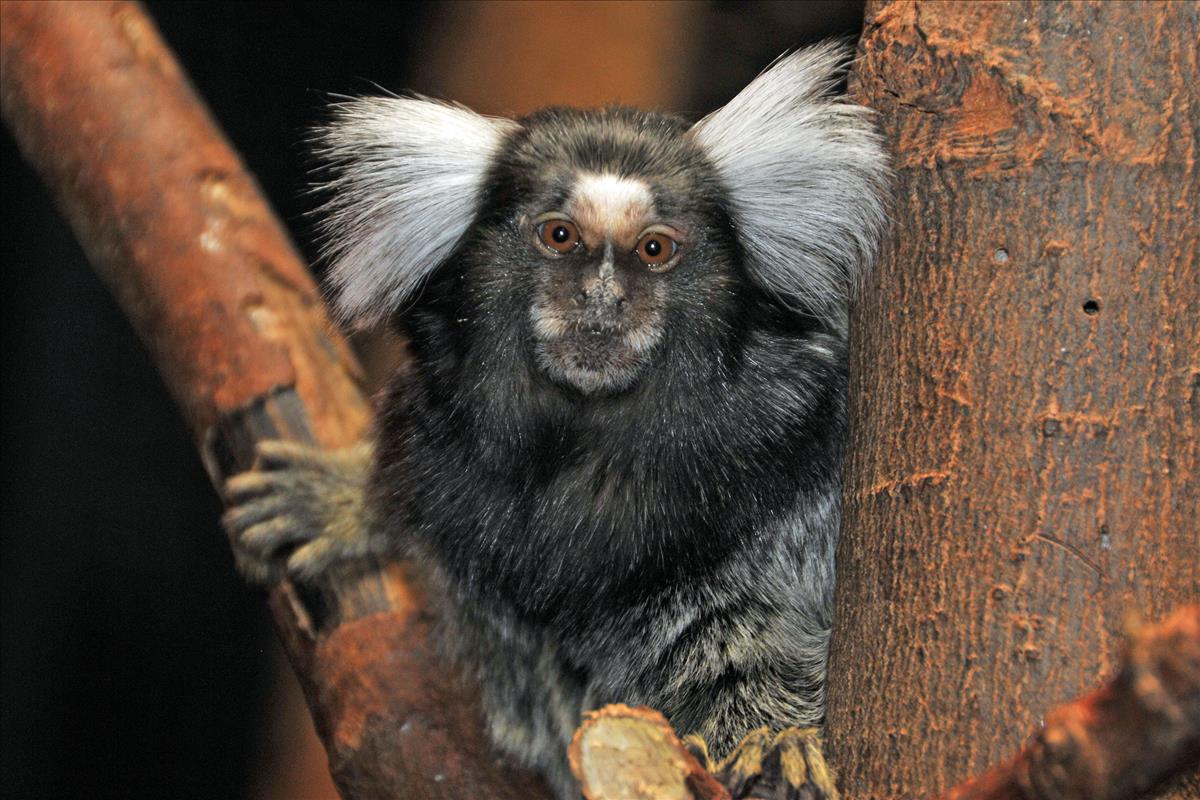 Callithrix jacchus is also known as the white-eared marmoset. The coat is grey, soft and dense with the tail having alternate dark and light rings. The face is covered with short hair including a few whiskers. The ears have white tufts. The forelimbs are shorter than the hind limbs. Hands and feet are elongated. Thumbs are not opposable. There is a long curving nail (tegulae) on each digit, except one big toe on each foot which has a flat nail (ungulae). The lower canines are the same length as the incisors. Nostrils are separated by a broad nasal septum (platyrrhini or broad-nosed). Adults' head and body size is 150 to 305 mm, with a tail length of 180 - 405mm, adults weighing is 230 to 453 g. There is no sexual dimorphism (no difference between males and females in secondary sexual characteristics).

Endemic to Brazil, from the northeastern coast west to the Rio Grande.

They are found in a variety of forest types from undisturbed primary forests, through riverine forests and scrub in more open country, to regenerating young forests and even in orchards and gardens. Introduced marmosets even thrive in cities like Rio de Janeiro and Buenos Aires. They do best in young growth where there is dense vegetation with many creepers and vines.

It is routine for the female to give birth twice a year. Females are not known to have menstrual cycles and are capable of having offspring at the age of 14 months. Gestation period is 142 to 150 days. There are usually two young, but may be one to three. The newborn weighs 30 g, but must be able to cling immediately to the mother’s fur and haul themselves up to a nipple in less than 20 minutes. Clearly it is a disadvantage to be the third of triplets, since the female has a single pair of nipples. The father and other siblings show little interest in the actual birth, however, within a few hours take over some of the carrying duties.

Development is fast, and the young begin to eat solid food at four to five weeks of age. Weaning takes place soon after. The infants are almost independent by the 12th week, but return to sleep on a parent’s back until four months of age. They reach full physical maturity at 14 months. Lifespan is 10 years in the wild and 16 years in captivity.

Marmosets organize their lives around their families. Neither the male nor the female of the pair will tolerate rivals for the attention of their mate, and between them, are very efficient in rearing large numbers of offspring. They usually travel in groups of 3 - 12. Males mark their territory by rubbing scent from their scrotal glands onto branches. Eyesight, hearing and sense of smell are well developed. Emotions are expressed by movement of the eyelids, ears and hairy adornments of the head. A variety of high-pitched, bird-like chirps are uttered, accompanied by grimaces and short bursts of “gee-gee-gee”. The mating call is a series of short “uistiti-uistiti”.

Being diurnal, they seek shelter in tree holes and cavities. At rest, they sometimes draw their fingers inward to pierce bark with their claws, the belly is in contact with the branch and all four limbs hang on either side. Movement is quick and jerky as they run and hop in trees and on branches. Tegulae, the claw-like nails, are unique to marmosets, allowing them squirrel-like motility and grip on tree trunks and branches. Wherever marmosets are found, certain trees are peppered with holes, gouged out by their canines and enlarged incisors to harvest an exudate of gum and sap. They also scent mark the holes with urine and scrotal scent to reinforce ownership of the territory.

Predators include birds of prey, tree dwelling snakes, small wild cat species and some mustelid species. Habitat loss is also a concern. Although widespread and common in many localities, and even replacing other Callithrix species where it has been introduced, C. jacchus populations are declining through habitat destruction in many parts of their range.