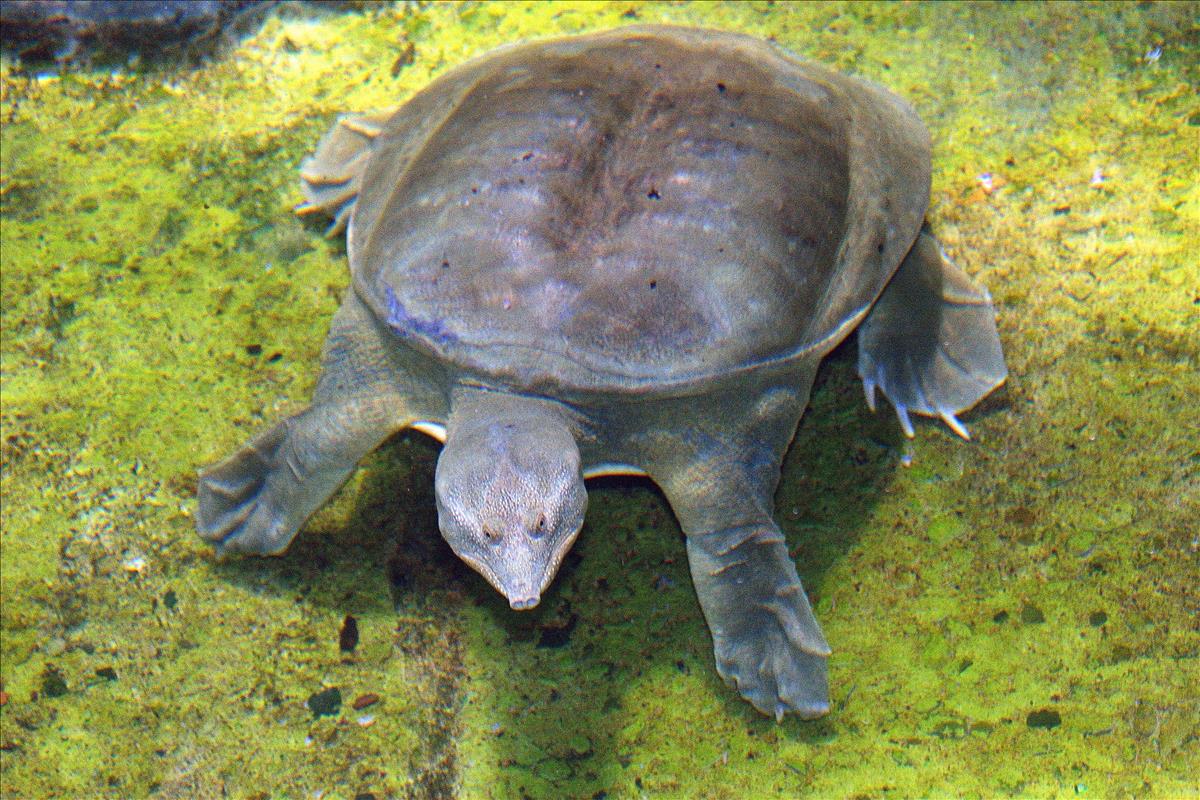 This is a small to medium sized turtle with a maximum shell length of 25 cm. The leathery carapace is oval shaped and is relatively smooth; however, the anterior portion is studded with blunt knobs. The colour is generally gray-brown but can be slightly yellow. The white or yellow plastron has no special markings other than, up to seven plastral callosities that may develop. The head is medium sized with a tube-like proboscis which has a horizontal ridge that projects from either side of the nose, like a snorkel. The head and limbs are brown or olive in colour and there are a number of dark lines on the head. The throat and underside of the limbs are light with close wavy lines under the neck. The skin is quite thin and the bone structure is poorly developed. However, the lips are thick and fleshy which conceal the strong jaws. Males are generally smaller than the females. The latter also have a slightly domed carapace.

The turtle lives in rivers and creeks with a slow current, lakes, ponds, marshland, and rice paddies.

This species is largely carnivorous eating fish, crustaceans, worms, and insects but they also eat leaves and seeds of marsh plants.

Mating generally occurs from March to September. In Japan they mate from May to July. The male uses the claws of his front limbs to clasp the front rim of the female’s shell during copulation and may bite her neck and/or limbs. Females begin nesting early in the spring and continue until late summer. A shallow, boxlike nest is excavated and a clutch of 15-28 brittle, spherical eggs measuring approximately 20 mm each is deposited. Several clutches can be produced in a single year. Although incubation is completed in 60 days, hatching may occur after 40 to 80 days.

The Chinese softshell turtle is an excellent swimmer. Although it occasionally basks on the banks, it tends to remain buried at the bottom of its aquatic habitat for most of the day. It can stay submerged for long periods of time by absorbing oxygen through the skin (about 33%) and the lining of the throat (67%). Most carbon dioxide passively diffuses through the skin. In Japan, this species hibernates from October to April.

This species is valued for its flesh and is widely consumed throughout its range. Because of their declining numbers in the wild in certain parts of its range, they are being extensively farmed, primarily in southeast Asia to supply the food and medicine market in China.