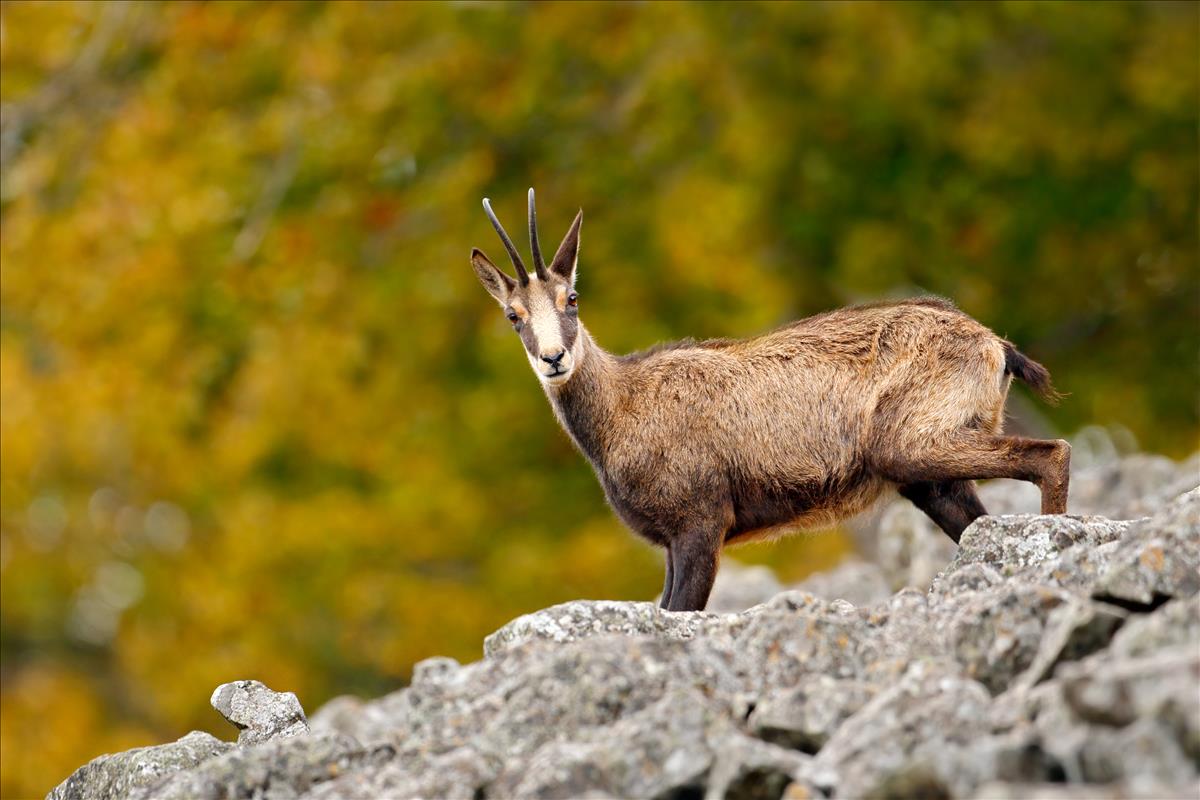 A distinct feature of this species is the slender hook-shaped horns, which are set close together on the forehead from which they project almost vertically. The horns are quite straight until they curve sharply back near the top, forming hooks. Both sexes have horns.

The hair is stiff and coarse and the summer coat is fairly short and tawny brown or beige-grey in colour. The blackish-brown winter coat is much longer with a soft dense underfur. The under parts are lighter in colour and the throat patch is white. Males are slightly larger than the females.

The northern chamois is native to mountainous parts of central and southern Europe and Asia Minor, where it occurs as seven subspecies: balcanica, carpatica, cartusiana, rupicapra, tatrica, asiatica and caucasica. The subspecies rupicapra is found in the Alps of Austria, Germany, and eastern France. Chamois have been introduced to New Zealand and Argentina.

Rocky cliffs over 1800 metres and alpine pastures. They inhabit lower altitudes in winter.

Flowers, herbs, and various other small plants. During the winter, when they move to lower ground they will eat lichen, mosses, and young pine shoots. When the snow is very deep, they may go without food for periods of up to two weeks without obvious harm.

Females and young males live in herds which vary in number from 10 to 50 or more. During the rutting season (Oct - Dec) the adult males join the herd of females and kids born the previous year. In this period the males become territorial by marking tree trunks and branches with a strong smelling secretion from a gland at the base of the horns. They drive young males from the herd and have been known to kill some. After a gestation period of about 170 days, the female gives birth in a shelter of grass and lichen. The usual number of young is one, although twins and even triplets have been recorded. The young are able to follow their mother almost immediately after birth and quickly learn to climb and jump. The young are fully mature at eight to nine months.

This species is nimble, agile, daring, and graceful. Its ability to move with ease among rocks in extremely difficult terrain is due mainly to the structure of the hooves, which have an elastic base and a hard, thin edge. They can jump almost 2 metres in height and 6 metres in length and can run up to 50 km/hr. All their senses are very acute. There is often a “sentry” posted to give warning of approaching danger, which is done by stamping the feet and uttering a high pitched whistling noise.

When alarmed, the herd flees to inaccessible places, often making tremendous leaps. If a female is badly injured or killed, other females will take care of her young. This has played a major role in the survival of the species. Except for the mating season, adult males lead solitary lives. Only one male is accepted by the herd, which often results in fierce battles.

: Lynx and wolf. The young are vulnerable to foxes, badgers, and large birds of prey. The chamois has been hunted for meat and for their skin, which is soft and pliable and can be made into cloths for cleaning – “chammy”. Fortunately a method has been found to treat other hides to soften them and the amount of hunting has been reduced. The herds are periodically decimated by a fatal type of scabies known as “gamsraude”, but they always manage to survive.

Human disturbance is a threat, particularly as a result of increased tourism and leisure activities in mountain areas. Competition with domestic livestock and introduced species, such as the mouflon (Ovis aries), is a threat to the more vulnerable subspecies, although it is not considered to be a major problem. R. rupicapra does however; suffer periodic outbreaks of sarcoptic mange, causing local population declines. In 2006, a new disease, pestivirus, was first recorded in this subspecies. In general, habitat loss is not a major threat to the species, as much of its range falls within protected areas. However, habitat loss may be a problem in some areas.