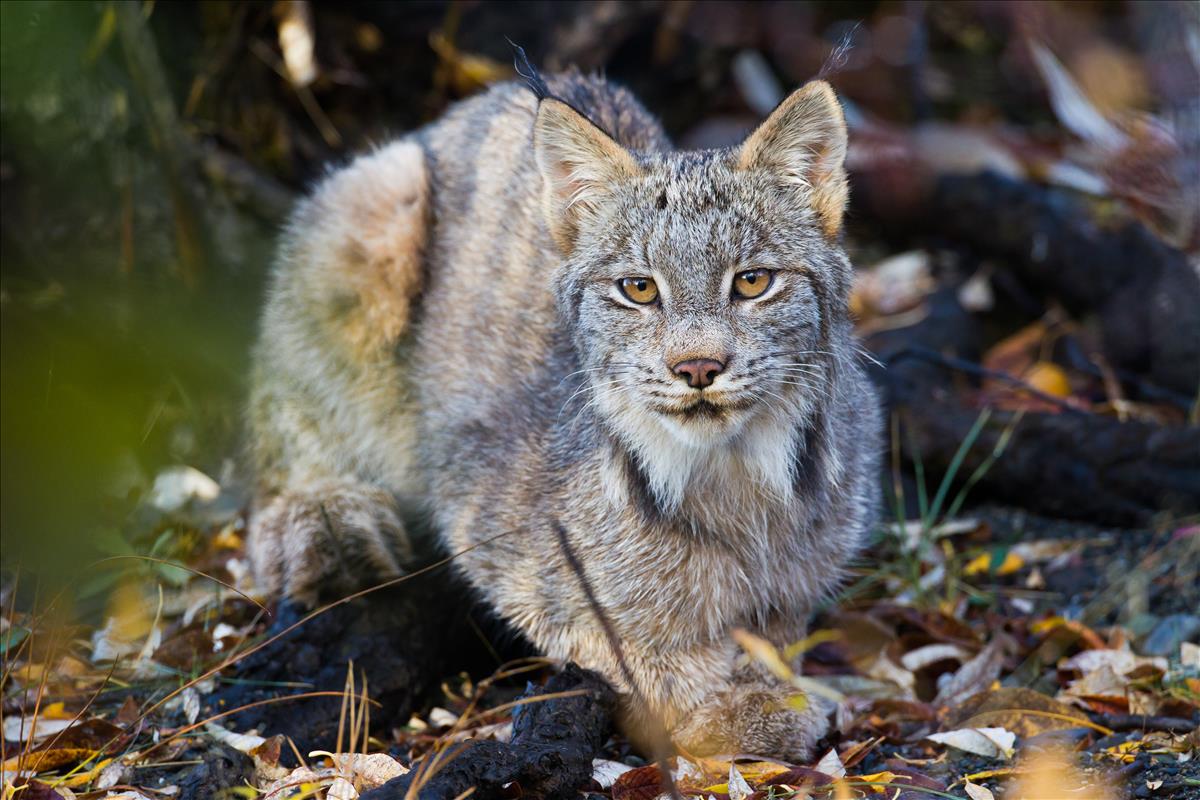 The lynx is a relatively small cat with a short body and long legs. It is a grizzled tawny colour with black mixed in. The upper parts may have a frosted gray look and the underside may be more buff. Many have dark spots. The tail is short (10 - 15 cm), and has a black tip that is sometimes ringed. Triangular shaped ears have prominent long, black tufts. Fur is long and thick and is especially long on the lower cheeks in winter. The short broad face has long, pale cheek tufts. Paws are large and densely furred. Length of head and body: 80 - 105 cm. Weight: 8 - 11 kg, males being slightly larger than females. They stand about 48 to 56 cm high at the shoulder, with hindlimbs that are longer than the forelimbs.

Much of Canada, from Newfoundland to the Yukon. In the USA, they are found in northern areas of many states including western Montana and in nearby parts of Idaho and Washington. There are small populations in New England and Utah and possibly in Oregon, Wyoming and Colorado.

Densely forested areas, but on occassion roam short distances onto the tundra above the tree line. Sometimes they are found in rocky areas.

Lynx are strictly carnivores. They will eat birds, rodents, small deer, caribou fawns, and mountain sheep lambs. However, their main diet is snowshoe hare. Lynx populations parallel that of the snowshoe hare due to the lynx's dietary dependence.

Females enter estrus only once per year. Estrus lasts for one to two days occurring from mid-February to mid-April, mainly February to March. After a gestation period of nine to ten weeks, the kittens are born in April to July in fallen logs, rock crevices or similar shelter. One litter per year of one to five kittens, mostly two or three, are born weighing 197 to 211 grams each. Eyes open at ten to twelve days, and at about eight to ten weeks the kittens moult from their paler spotted immature coats into adult coat. Lactation lasts for five months after which the young eat prey. The young stay with their mother until the following winter’s mating season. Males do not participate in parental care. Males are sexually mature at 33 months and females at 21 months. In the wild, lynx have lived as long as 14.5 years. In captivity, life spans of 26.75 years have been recorded.

Well adapted for life in their snowy, cold, densely forested habitat. Long fur protects them from extreme cold. Their large, well-furred feet make excellent “snowshoes”, especially in slightly crusted snow, and allow for silent nocturnal stalking. Being nocturnal hunters, they have excellent hearing and sight. Their hearing is enhanced by their antennae-like ear tufts. Not being a good runner, but having a rather clumsy gallop, lynx often ambush prey from ledges and trees. When stalking prey, they move to within pouncing distance before striking. They are good climbers and with their long, powerful legs may (reputedly) jump 4.5 m from a walking or standing start. Claws are retractable. They are also excellent swimmers. Active all winter, lynx have phenomenal endurance for cold, injury and famine and will leave their 10 -13 km range if food becomes scarce. They generally cover four km per day in their regular travels. In a fight, both teeth and claws become weapons.

Animals urinate frequently to mark their home range. Lynx are mainly solitary except during the breeding season and seem to be territorial. Male home ranges may include the range of one or more females and their young. Home ranges vary in size from 12 - 19 square kilometers to much larger. In Canada, scientists have measured daily traveling distances ranging from less than a kilometer to 19 km.

The lynx has a variety of vocalizations, like those made by house cats, but louder. They tend to be secretive animals and are rarely seen in the wild.

Probably starvation following rapid cyclic declines in snowshoe hare populations, which occur about every ten years, is the greatest single source of natural mortality among adults and yearling lynx. In Canada, trapping has been a factor, but it is now controlled in the provinces that still allow it. The two infectious diseases, which are more likely to cause significant mortality, are rabies and distemper. Cougars are its natural predator. The northern range expansion of the more aggressive bobcat may contribute to the overall decline in lynx numbers as well.