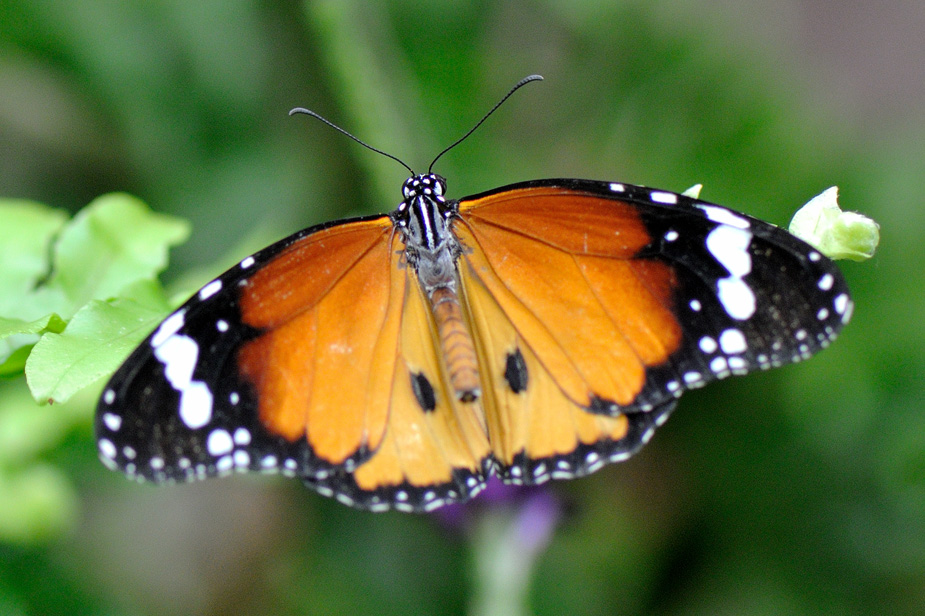 Like most insects, adult butterflies have 6 jointed legs, 1 pair of antennae, 3 body parts (head, thorax, abdomen), exoskeleton, and compound eyes. They have thin delicate wings covered in minute coloured scales. The arrangement of the scales is what determines the colour and pattern of each species’ wings. Size varies greatly between the species of butterfly, from the half-inch (1.75 cm) wingspan of the western pygmy blue butterfly, to the 11 inch (27.5 cm) wingspan of the Queen Alexandra’s birdwing butterfly. Potential life span of the adult butterfly depends on the species – as short as a few days for some species, and as long as a year for others, however most die (usually through predation) long before their full potential life-span.

Butterflies are found on every continent except Antarctica. It is estimated that there are between 15000 -30000 species of butterfly worldwide.

Found in almost every type of habitat, from mountain, marsh, forest, field and rainforest to even more extreme habitats like desert, tundra, and urban areas.

Most adult butterflies eat flower nectar (and usually from a variety of flowering plants) and some also eat pollen or liquids from rotting fruit or very wet dung. Larval stages (caterpillars) usually eat plant material – often just leaves – and some species of caterpillar will only eat specific types of plants (some species will only eat leaves of ONE species of plant), which vary depending on the type of caterpillar. Very few species of caterpillar are carnivorous (like the harvester butterfly’s larva) or even cannibalistic (like the orange tip butterfly’s larva).

Depending on the species, a butterfly can mate in the air, or on the ground, and coupling can be as quick as a few seconds to as long as several hours. Fertilization is internal – the male deposits a spermatophore (sperm packet) into the female, and those sperm fertilize the eggs before she lays them. Depending on species, eggs can be laid one by one, in small groups, or even hundreds at a time. They are usually laid on the underside of leaves of plant species that the caterpillar will eat. Butterflies do not care for their young, nor stay paired with their mate.

Eggs from tropical species can hatch within a week, however eggs from cooler-region butterflies generally take closer to 2 weeks to hatch, or even “hibernate” over winter and hatch in the spring. The butterfly larva (caterpillar) will usually consume the egg upon emerging, then begin eating the foliage it was laid on. As it eats and grows, it will moult its skin several times. Depending on species, a caterpillar can have from six to eight instars (an instar is the stage from one moult to the next).

At the final moult, instead of the caterpillar emerging, the chrysalis (pupae) emerges, at first soft and vulnerable, but quickly hardening to protect the insect as it undergoes its metamorphosis, which can take from 1 to 40 weeks depending on species.

Upon emerging from the chrysalis, the new butterfly pumps fluid from its abdomen into its wet folded wings, causing the wings to expand to their full size. The butterfly remains fairly still until the wings have dried and hardened, and are ready to be used to fly in search of food, a mate, and to avoid predators.

Some butterflies are migratory (e.g. monarch butterflies migrate south towards Mexico to avoid the cold Canadian falls and winters). Some are toxic – usually displayed by orange and red colouration, and some have evolved to mimic toxic species. Some caterpillars are also toxic, or covered in spines for protection. Other species use camouflage (as caterpillars and/ or as adults) to avoid predation. Many non-toxic species are able to fly faster and with more precision than the species who rely on toxins to deter predators. A few species have evolved specialised mouth parts (e.g. longer proboscis on a butterfly to reach the nectar in cone shaped flowers that other species might not be able to reach, or caterpillars with stronger mouth-parts to eat tougher/thicker plants than other species do).

The species with the most specific criteria (for habitat or for food source) are usually most at risk of extinction. The biggest threats to most species are human-caused – pesticides, habitat destruction, and agriculture (which often removes the food-source plants of the caterpillar).