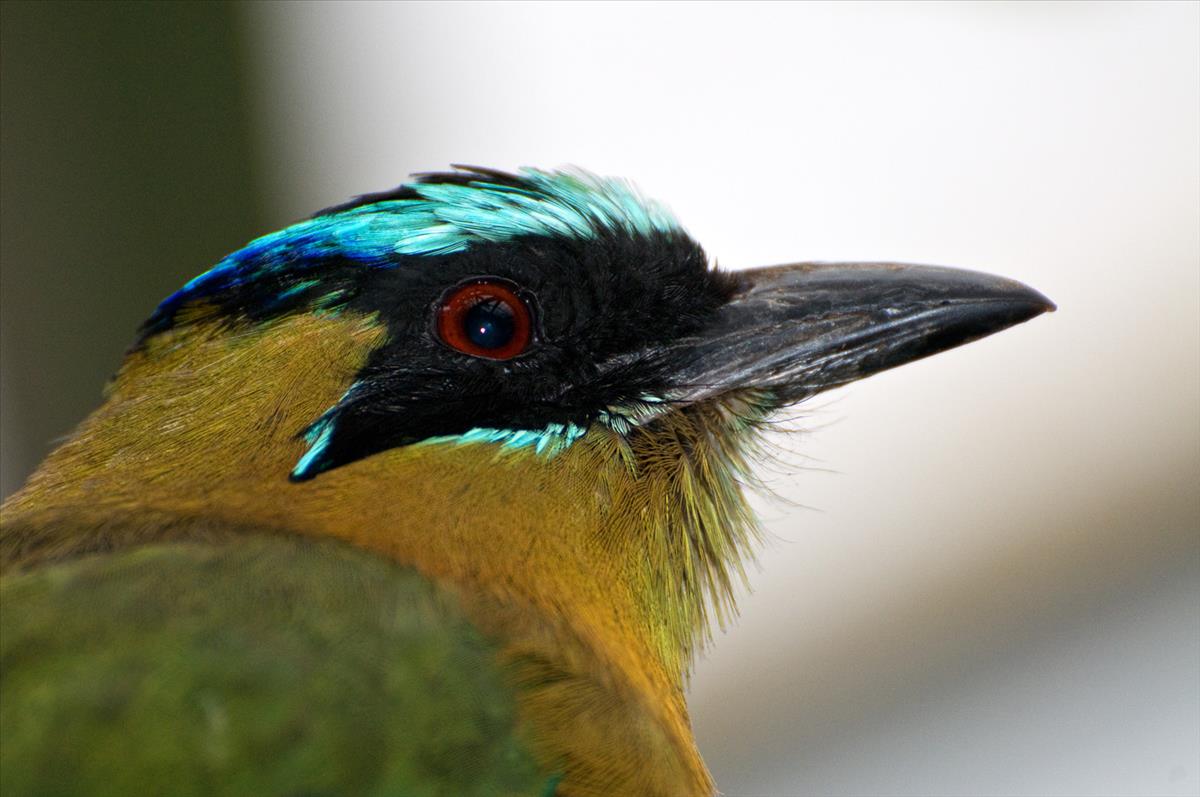 The male Momotus momota measures between 38 and 44 cm in length and weighs from 77 to 148 g; the female is somewhat smaller. In plumage, the sexes are identical. The crown is black, bordered with a wide band of turquoise-blue which also covers the forehead. There is a black eye mask. The upper part of the neck is rufous, the back is green. The under parts are greenish. The tail is quite long with a bare-shafted racket tip. The back and upper tail feathers vary in shade from olive to parrot green. The wings are a bright green with bluish green primaries. The eyes are a dull red, the short legs and feet are gray. The heavy, broad bill is black.

They are found in Central and South American countries. The blue-crowned motmot ranges from north-east Mexico to north-west Peru, Paraguay, Bolivia, from Trinidad to northern Argentina.

They reside in many kinds of environments including tropical evergreen and deciduous forests, flooded and riverine gallery forests, montane and elfin forests, secondary vegetation and even, shady gardens and coffee plantations. They can be found at heights of 1,300 m.

The blue-crowned motmot is largely insectivorous. Beetles appear to be the main food source particularly. Other insects are cicadas, stick insects, spiders, and larvae of various kinds. It also consumes frogs, earthworms, snails, small snakes, and mice. Fruit is often plucked from the trees to be consumed as well.

Preparation for reproduction begins months in advance during the rainy season (Aug-Oct) when the soil is soft. The blue-crowned motmots, both male and female, dig a hole in the soil to serve as a nest. The nest is usually in a less obvious location so that it is difficult to discover and is therefore, unlikely to attract predators. Generally, eggs are laid between March and early April. In Mexico it is somewhat later, between early May and late June. The female lays three to four white, roundish eggs which are hatched by both parents. One adult will take the early afternoon to dawn shift; its partner, usually the female, will then take over. Incubation lasts approximately 21 days. Both parents care for their undeveloped young and feed them insects innards and protein rich fruit constantly for about a week and then simply feed them once a day and leave them unattended during the night. Although the burrow is unlined and layered with food residue and excrement, the fledging juvenile’s feathers look fresh and clean when it exits after about 38 days. The young resemble the parents but do not have the racket-like tail feathers, as of yet.

These motmots do not flock but live in pairs throughout the year even though they seem to forage separately during the day. It’s therefore, difficult to distinguish which birds are paired. They are not terribly active and most of their movements are during twilight. They tend to go to rest later than other birds. They do not sleep in their burrows but nestle in the foliage. Their flight is sudden, swift and direct but it doesn’t last long.