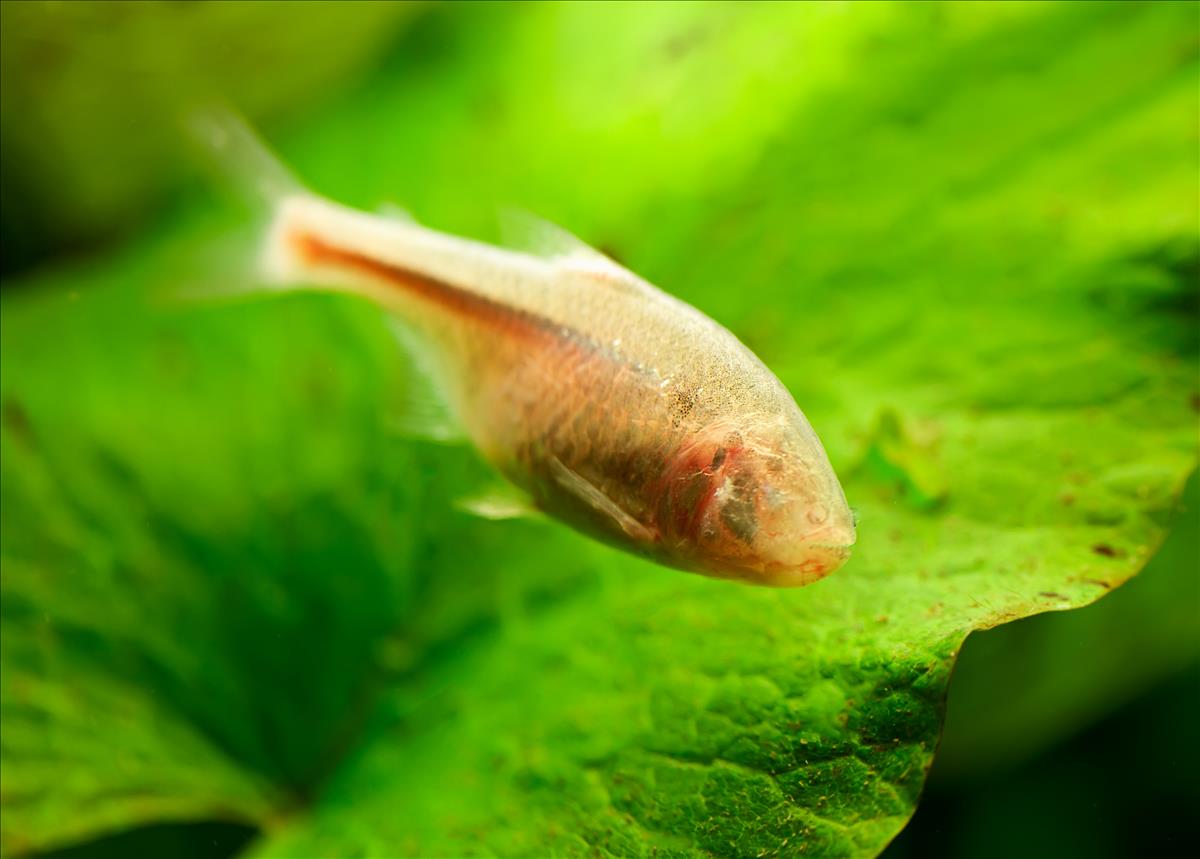 Astyanax jordani is recently evolved from the Mexican tetra (A. mexicanus).
Although it is sometimes confused with the blind cave form of A. mexicanus, it evolved separately from the surface form, and is considered a different species. They are related to many other fish including catfish, tetras, tiger fish and piranhas. They measure between 7 and 12 cm in length. Their normal lifespan averages four years. They tend to be pudgy rather than streamlined, although males tend to be slimmer than females. A characteristic of this genus of fish is that they have a complete lateral line. They have a prominent dorsal fin and a forked tail fin. The pelvic fin is separated from the anal fin. They carry a second smaller, fleshy dorsal fin on their backs, called an adipose fin. It is located between the dorsal and tail fins. These fish have teeth set in their jaws with a replacement row behind the functional row. They lack barbels. Their skin is smooth and lacks pigmentation, giving it a pinkish hue. A. jordani are troglobites (a species that is confined to caves and live in constant darkness). Living in complete darkness, these fish have vestigial (non-functioning) eyes which are covered over by layers of skin. In addition, their pineal organ (a photo-sensory organ that contains photoreceptor cells similar to a retina) appears to be regressed and unlikely to function. They are a schooling fish.

Found from Texas to Mexico. Some species are also found in tropical Africa.

Tropical - freshwater: water temperature ranges between 20 - 25¢ªC with a pH level of 7 (neutral acidity). A. jordani are found in underground rivers and lakes in caves.

Blind cave fish spawn by broadcasting eggs. The male and female swim alongside each other near the surface of the water, with their ventral (abdominal) surfaces pressed together; the female scatters eggs, which are then fertilized by the male. The eggs fall to the cave bottom and if not eaten by an adult or another predator, hatch within five days. The larvae have normal eyes when they hatch, but these become enclosed in tissue after a few weeks.

Because blind cavefish have no functioning eyes, they depend on their lateral lines to detect motion in the water and find food, as well as locate enemies and avoid obstacles. They also have a very good sense of smell. Studies show that blind cave fish appear to explore objects in the water. They approach, nearly collide with and then veer away from the object only to swim beside it, just millimetres away, as though they are attempting to determine size and shape. They must swim close to obstacles to discern details. In this way they make very effective use of their lateral lines. As well, blind cavefish have developed an internal bony structure called the Weberian apparatus. This consists of four or five modified vertebrae (the scaphium, tripus, claustrum, and intercalarium), which connect the swim bladder to the inner ear. This apparatus helps enlarge the vibrations of sound waves that are received by the swim bladder and transmits the amplified sound to the fish's inner ear. This allows them to pick up a wider frequency of sounds, gives them better pitch discrimination and sharper hearing. These adaptations aid in detecting enemies and potential prey. Blind cave fish are believed to use sound to communicate with each other, and the Weberian apparatus would facilitate this ability as well.

Blind cave fish are at risk. Pumping water to the surface for irrigation or other purposes lowers the water table and changes the flow of subterranean rivers and streams. Because they inhabit a very limited and specialized environment, they were added to the IUCN Red List in 1984.