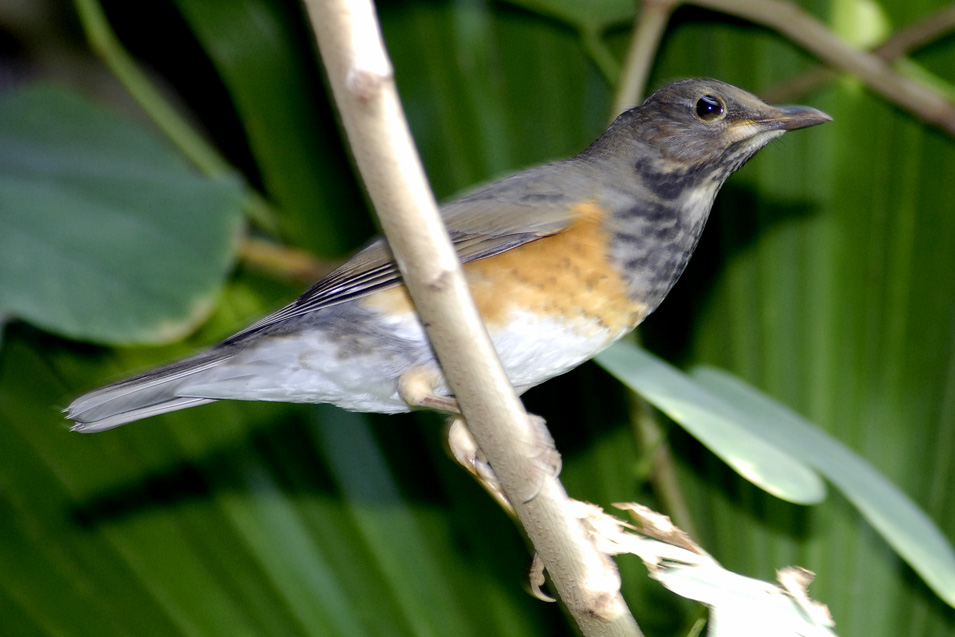 The black-breasted thrush, male and female, measures between 22 and 23.5 cm in length, tail included. The male is black from the head to the nape and breast. The rest of the upperparts are slate-grey, orange on its belly and flanks, and white on the lower belly to the vent. The bill, a narrow eye ring and the legs are orange-yellow. The female’s head from below the eyes to the tail is grey-brown. The throat, starting at the bill and extending to the breast band is a diffused buff shade. The colouring of the remaining underparts is the same as those of the male. The juveniles resemble the female but are finely spotted and streaked in orange from the head to the shoulders. Double orange spotted wingbars run across the folded wing, and a spotted underneath extends to paler orange flanks.

Its natural habitats are tropical or subtropical, dry forests and moist montane forests. They prefer oak and conifer forests including open pine woods, broadleaf evergreen forests and second growth. These forests typically range from 1,000 to 2,500 m above sea level. During the winter period they can be found in scrub jungle or even mangroves at sea level.

Insects, mollusks and berries. They forage mostly on the ground but do visit fruiting trees from time to time.

They tend to breed at different times in the various countries; for instance, in India they breed from April to July, Myanmar from April to June and in China from May until June. Like many other members of the order of Passeriformes, they build a sturdy nest in the shape of a cup, using green moss and fibers usually at a height of one to six metres in the fork of a branch in a small tree or shrub. On occasion, they may build their nest on the ground or in a hole in an embankment. There are usually three to four eggs, either buff, pale green and/or green-blue in colour. They have brown, lilac or reddish-brown spots and blotches. Incubation time is from 12 to 14 days.

The black-breasted thrush is a rather solitary bird. They tend to remain in their chosen habitat but some seasonal vertical movement has been observed even some longer distance migrations. This would happen primarily prior to the winter period. Their voice is rather melodious; a series of short spaced out leisurely phrases of a number of variable notes probably involving some mimicry.

They are scarce in India but fairly common elsewhere. Because of their widespread distribution, they are not particularly threatened in most of the areas they inhabit. Habitat destruction is one of the factors that could affect their populations.