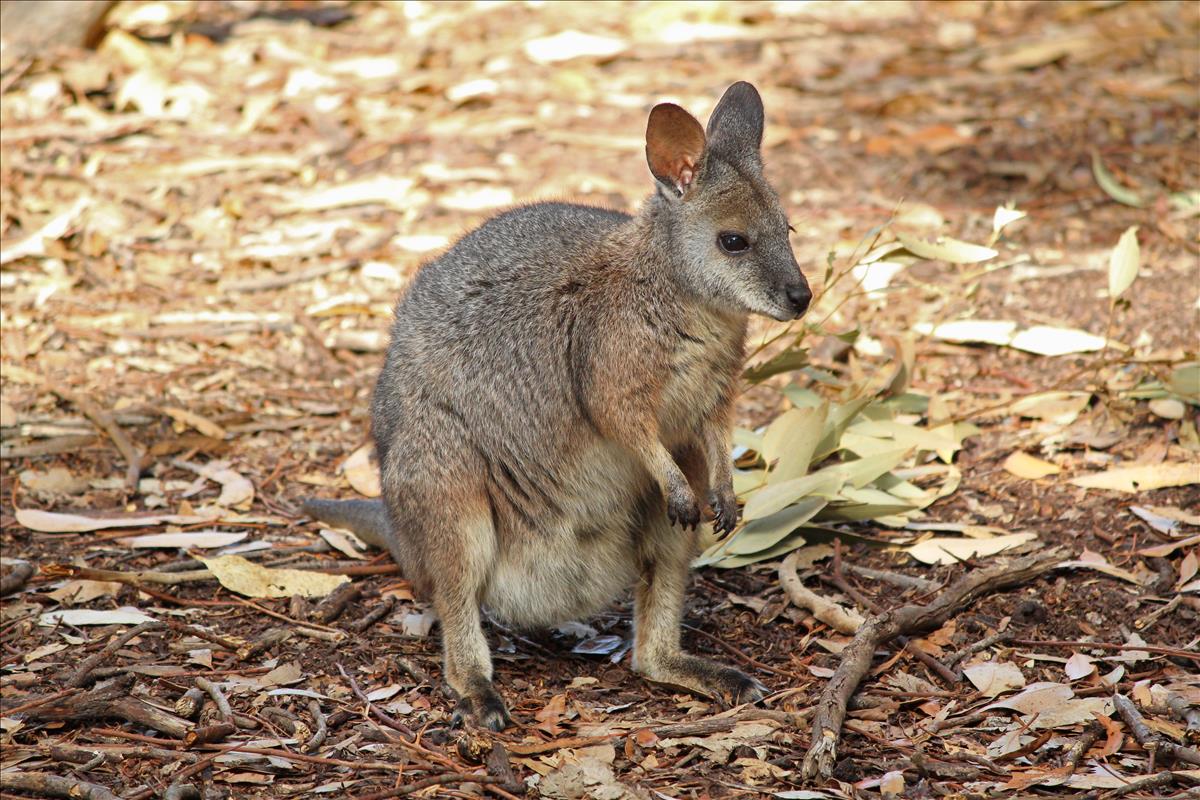 Also known as the red-necked wallaby. Like kangaroos, the Bennett’s wallaby has hind limbs that are markedly larger and stronger than the forelimbs and their tails are long, thick and used as an aid for balancing. As do all macropods, the Bennett’s wallaby has a forward-opening pouch with four teats. The wallaby can be distinguished from the kangaroo by its’ black nose and paws, and white stripe on the upper lip. It has reddish brown fur on the shoulders, a white chest and belly with grey fur on the remainder of the body. Males are generally bigger than females and can weigh more than 20 kg and stand up to 1.5 m tall.

Bennett’s wallabies are found throughout the coastal forests of eastern and southeastern Australia and Tasmania. In 1870 they were introduced to New Zealand where their population continues to increase. A small population of albino Bennett’s wallabies live on Bruny Island, off the south-east coast of Tasmania.

Bennett’s wallabies inhabit forests and open areas nearby. Partial clearing of forests have resulted in scrubby, pastureland where wallabies can feed alongside bushland in which they can shelter.

The species is largely solitary, although loose groups often share common feeding areas. They graze on grass and herbs, often damaging crops and pastures causing them to come into conflict with landowners.

In the wallabies of Tasmania, births occur between late January and July with the majority of young born in February and March. On mainland Australia, females give birth in all months. Being marsupials, they give birth after a very short gestation period (about 30 days). The immature embryo is expelled through the urogenital sinus and must wriggle along a path of dampened fur from the mother’s tail to her pouch. Inside the pouch the embryo attaches to a teat for suckling. The female will mate again very soon after giving birth, but if a young is already established in the pouch, the new embryo stops developing when it is only a ball of cells (the blastocyst stage). This process is known as embryonic diapause or delayed implantation. The new embryo does not start to develop until the young already present in the pouch is ready to leave or dies. It is possible for a female to be suckling a young in her pouch, a larger young outside the pouch and be carrying an undeveloped embryo. Quite remarkable is the female’s ability to express milk with differing compositions of lipids, carbohydrates and proteins from different teats depending on the needs of the growing pouch young and the larger young. Pouch life is about 280 days and weaning occurs at 12 - 17 months.

Bennett’s wallabies are mainly active at dawn and/or at dusk (crepuscular), which may be an adaptation to reduce predation or as a way of avoiding thermal stress while capitalizing on available light.

Compared to its’ front legs, the hind legs are long and powerful; an adaptation for moving quickly across essentially flat terrain.
The occurrence of ruminant-like bacterial digestion in the kangaroos and wallabies enables these marsupials to colonize areas which would be nutritionally unfavourable to most other large mammals. In this type of digestion, the food is fermented by a dense bacterial population in the esophagus, stomach and small intestine.

The delayed implantation mechanism gives this macropod a selective advantage over other mammals by its ability to quickly replace a lost young without the need to mate again.

Tasmania’s wallabies are a source of food for Tasmanian devils, quolls and eagles who take the young, sick or injured. Although partly protected by law, they may be hunted for their meat and fur during annual open seasons or under license as a pest of crops or pastures.