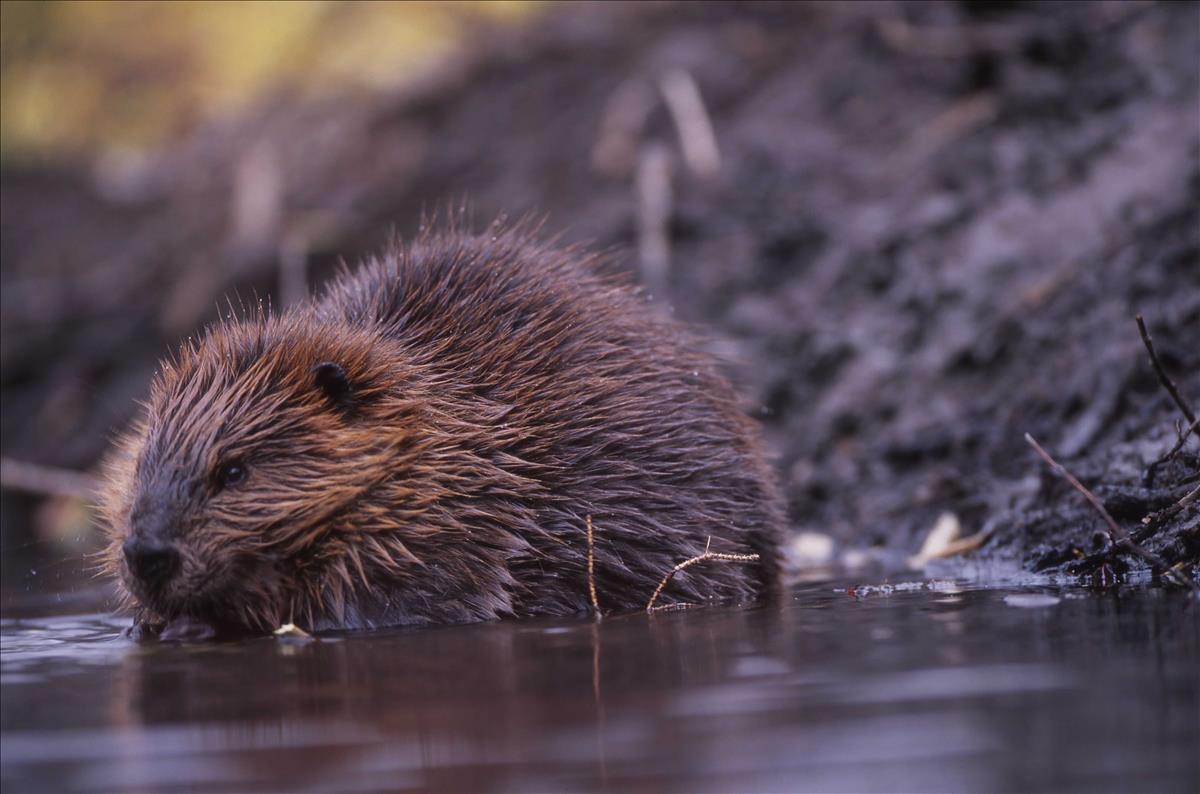 This is the largest rodent in North America and second only to the Capybara in the American continent. They have a waterproof, rich, glossy, reddish brown or blackish brown coat. The underhairs are much finer than the outer, protective, guard-hairs. Ears are short, round, and dark brown in coloration. The beaver is high-rumped; the hind legs are longer than its front legs, thus making the rear end higher. They have five toes on all feet; only the hind feet are webbed. Second toes on hind feet have a double claw that is used for grooming. Possibly the most defining characteristic of the beaver is its tail. It is broad, flat, and covered in large blackish scales. Beavers can reach a length of 60- 80cm from head to rump, with a tail length of 25 - 45 cm. Kits at birth are approx. 38 cm in legth (tail included). Tail width is between 10 - 13 cm, and individuals weigh 12 - 25 kg.

North America; from Alaska east to Laborador, south to north Florida and Tamaulipas in Mexico.

Beavers are primarily aquatic animals. They live in lodges, of which there are three types: those built on islands, those built on the banks of ponds, and those built on the shores of lakes. The island lodge consists of a central chamber, with its floor slightly above the water level, and with two entrances. One entrance opens up into the center of the hut floor, while the other is a more abrupt descent into the water. The pond lodge is built either a short way back from the edge of the bank, or partly hanging over it, with the front wall built up from the bottom of the pond. The lake lodge is built on the shelving shores of lakes. To ensure adequate water depth surrounding the lodge, beavers dam streams with logs, branches, mud, and stones. The lodge, itself, is an oven-shaped house of sticks, grass, and moss, woven together and plastered with mud. Over the years repairs and embellishment leads to an increase in size. The room inside may measure 2.5 m wide and up to 1 m high. The floor is blanketed with bark, grass, and wood chips.
Beavers have been referred to as keys to wildlife abundance. As ponds created by the dams grow; sediments falling from the trees and silt carried by streams settle to form a fertile muck in which pond weeds and water lilies flourish. The pond also provides habitat for moose, waterfowl and other wildlife. As the dam decays and the water level falls, a sedge meadow appears and white tailed deer replace the moose. As coarse grass takes over, woodcock move in. Finally the dam gives way and the fringe of alders spreads to deposit a rich leaf mould.

They are usually monogamous, but when one mate dies the other will mate again. Male and female beavers are sexually mature at about 3 years of age. They mate between January and March in cold climates and in late November or December in the south. Beavers give birth to one litter of kits (baby beavers) per year, usually between April and June. The gestation period is about three months, or 105-107 days. Parental care lasts for one to two years until the young have reached the stage of independence. In preparation for birth, females will prepare a soft bed within the lodge. She then will use her flat tail as a sort of birthing mat. She will lick each kit clean, and nurse it. Both parents play a part in providing food for the young and protecting them from predators. When they are born they are fully furred, eyes are open, and they can swim within 24 hours. After several days they are able to dive out of the lodge with their parents to explore the surrounding area. They are weaned at one month. The beaver has a very well developed social hierarchy. Family groups consist of two adults, of which the adult female is central, several two year olds and the young of the current year. Young leave or are forced out of the colony by the age of two. Large lodges may have several family groups. Family life is co-operative, all help with food gathering and building. Their life span in the wild is between 10 and 20 years.

Aquatic - Swim very efficiently using hind feet and tail. Valves in the nose and throat close automatically when submerging, allowing them to stay under water for up to fifteen minutes. The mouth closes behind the incisors allowing them to carry sticks in their mouth while swimming. Their eyes have membranes which can be drawn over the eyeball. Their blood supply can be diverted from the paws to ensure supply to the brain and their metabolism can slow down to conserve blood supply.They have glands which produce castoreum, used to waterproof their fur.

Dentition: They have two incisors in each jaw which grow continuously as they are worn away. Four rootless molars with crescent ridges of hard enamel on the crowns are used for cutting the fibres of their wood diet. The large incisors have hard enamel faces and softer dentine backs. The dentine wears away faster than the enamel as the animal gnaws, leaving a keen biting edge of enamel at all times. The incisors are bright orange in colour and are at least 5 mm wide and 20-25 mm long. These teeth grow throughout the animal's lifetime and are a necessity to survival The beaver has to chew or grind its teeth continually to keep them ground down to a manageable length. If a beaver breaks a tooth or otherwise distorts its bite, the incisors elongate, force open the mouth permanently and cause the animal to starve. When felling trees they use their upper incisors to cut a ring around the trunk at the height of their mouth when standing on their hind feet and tail. They sink their lower incisors into the trunk below the ring and lever out a large chip. Two beavers working in shifts can cut down a 25 cm aspen in four hours. A single beaver can cut down a 12cm sapling in less than thirty minutes.

Dam and lodge building: Beavers build dams to slow down the flow of water in streams and rivers and then build stable lodges for shelter. The dams are engineered according to the speed of the water; in slow water the dam is built straight, but in fast water the dam is built with a curve in it. This provides stability so that the dam will not be washed away. Trees are trimmed and dragged to the building site or even floated in a canal dug by the beaver. The dam ensures water depth for the lodge. The trees are laid first then closed with mud and stones. Additional layers of mud and stones are added. Dams have been found as long as 600 m, but average about 23 m, and are generally about four metres high. Lodges are built by piling logs and branches, held down by rocks and mud, until the mass reaches one to two metres above water. The beaver gnaws its way into the mass from below the water level making access tunnels and chambers with raised platforms. If the water level rises and enters the chamber, the beaver gnaws away the roof and the detritus raises the floor. The outside of the lodge is plastered with mud except for a ventilation hole in the top. There are typically two dens within the lodge, one for drying off after exiting the water, and another drier one where the family actually lives. Lodges are usually 2.5 to 3.5 m in diameter by 1 m high, but may be as large as 5 m by 2 m high.

Behavior: Beavers are primarily nocturnal. They are only occasionally seen during the day, usually around dusk. Beavers travel significant distances from their homes to find food. If they find a good source, they build canals to the food source as a way to float the food back to their lodges. Logs and twigs are often stored underwater for winter feeding.

Destruction of habitat, water pollution, silting of streams, and loss of food resulting from forestry and hydroelectric operations. The young are threatened by bears, wolves, wolverines, lynx, and otter.