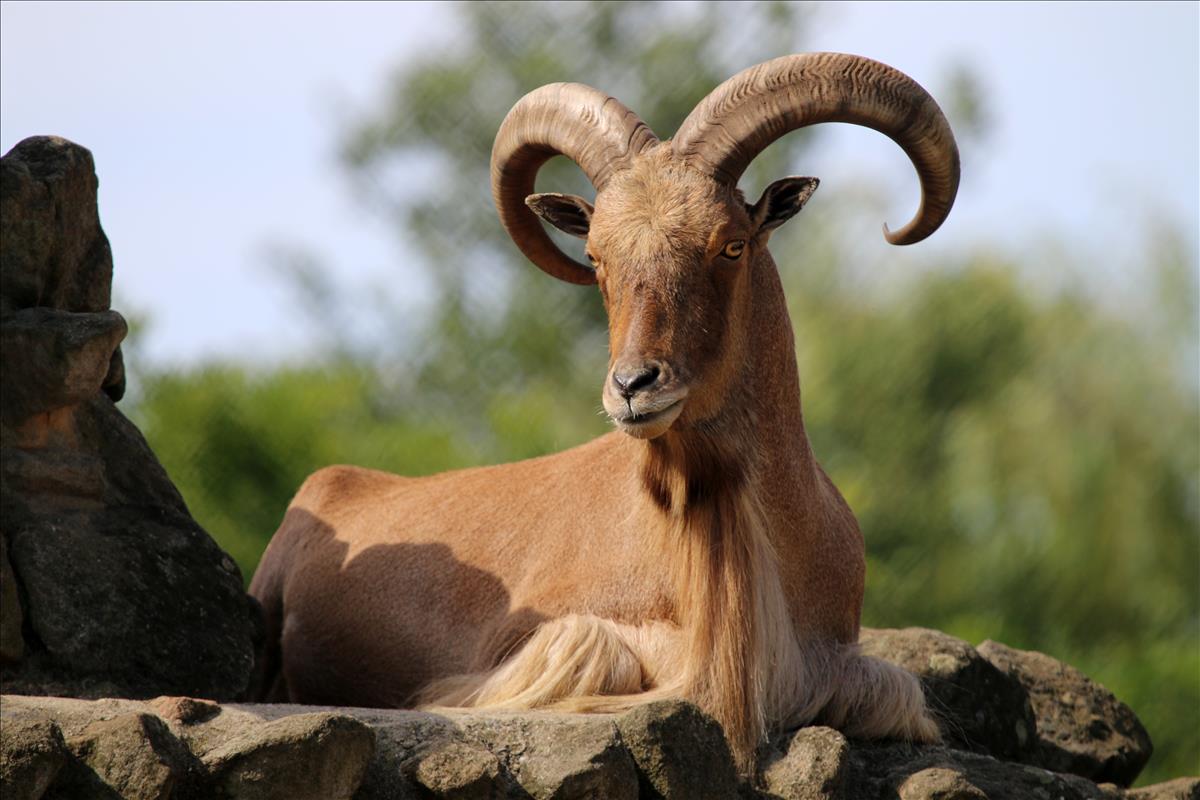 Barbary sheep are also well known as aoudad. This is the name used by the Berber people of North Africa. This genus is distinct from all other wild sheep; the most unique feature being the mane of long, soft hairs on the throat, chest and upper parts of the forelegs of the males. Although both sexes have a heavy fringe of hair on the throat, only in males does it extend down the neck to encompass the chest and front legs. The tail is also fringed. The short, bristly outer coat is reddish to sandy brown in colour. The chin, insides of the ears, a line on the under-parts and inside of the legs are whitish.

Both sexes have impressive horns, the males being slightly larger. These thick, triangular-based horns sweep upward, backward and then inward, curving in a semi-circle over the back. Horns have numerous fine ridges; although in older individuals these may be worn down, causing the horn surface to look smooth. The body is quite thick and sturdy. The short tail, which is hairless on the underside, has scent glands.

Northeast Africa. This is the only wild sheep indigenous to Africa. They have been introduced to several other countries including the southwestern United States and southern Europe.

Rough, rocky, barren, and waterless tracts are the chief habitat.

Grass, herbaceous plants, and stunted bushes. They both browse and graze.

Although breeding can occur throughout the year, there is a peak from September to November, with the subsequent young being born from March to May. The gestation period is 154 - 161 days and the number of young is one or two. Females may give birth twice per year. Like most open-country species, Barbary sheep give birth to well-developed young, which learn to climb and jump as skillfully as their parents at a very early stage. Newborns are able to negotiate the rocky hills almost immediately after birth. Although they continue to nurse for about six weeks, they begin to eat grass when only one week old. Barbary sheep generally associate in small family groups consisting of an adult male and female, with their offspring at various ages.

The Barbary sheep feeds primarily at dusk, dawn and during the night, on a diet of grass, herbs, and foliage from shrubs and trees. By feeding at night, when plants accumulate moisture from the atmosphere or become covered in dew, the Barbary sheep gains much needed water, enabling this sheep to survive without drinking water during dry periods in its arid habitat. Although they can generally obtain all needed moisture from their food, if water is available aoudad drink and wallow liberally.

An adaptation to this dry and unproductive terrain can be seen in the Barbary sheep’s reaction to threats; with an almost total lack of sufficient vegetation to hide behind, the Barbary sheep will freeze and remain motionless when threatened, their sandy-brown coat enabling them to blend into their surroundings. These sheep gather in small groups as their barren surroundings cannot support large aggregates of animals.

Barbary sheep are exceptionally sure-footed and have such jumping power that they can clear a two metre obstacle with ease from a standing start. These sheep also have pre-orbital glands at the inside corners of the eyes, inguinal glands in the groin and pedal glands between the hooves.

Barbary sheep herds decrease sharply during periods of drought. Desert natives take heavy toll on this animal which is an important source of meat, hide, hair, and sinews, all of which are valuable in a desert economy.