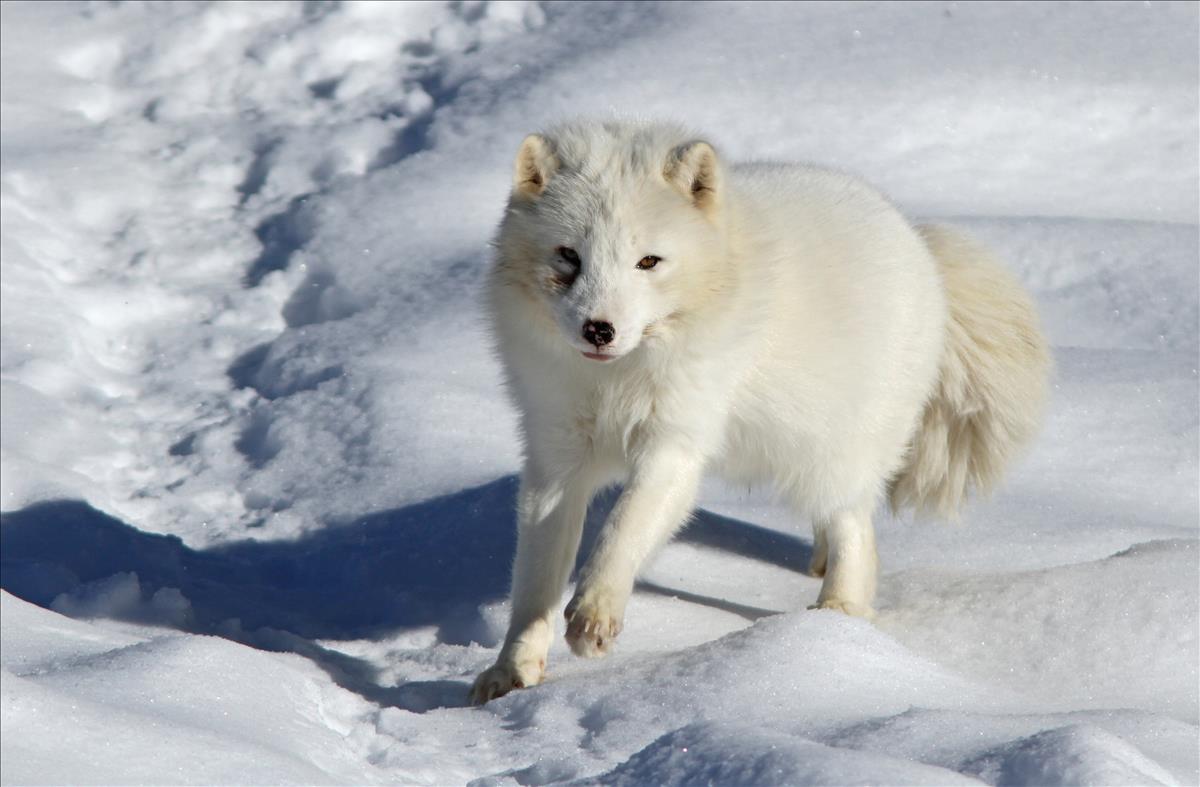 The Arctic fox is the smallest member of the wild canid families in Canada. It measures between 75 and 115 cm in length with the long, bushy tail representing 30 to 35% of its total length. It weighs from 2.5 to 9 kg. During winter time, it has a heavy white coat which changes to a thinner, two-tone brown one in May. The back, tail and legs become dark brown; the under parts buff coloured. A small proportion of Arctic foxes have a heavy pale blue-grey coat in winter which turns into a thinner, dark blue-grey one in summer. Only 5% of all Arctic foxes in Canada are blue whereas in Greenland the number rises to 50%. They have small ears, a blunt muzzle and short limbs.

Their range is circumpolar, inhabiting the arctic regions of North America, northern Eurasia, Greenland and Iceland. In Canada, the range occurs from the northern tip of Ellesmere Island to the southern tip of James Bay.

Arctic and alpine tundra, which are areas where there is an abundance of their principal diet, the lemming, Lemmus sibericus (see below).

They are opportunistic carnivores and their diet varies from one part of their range to another. They feed on practically any animal they find, dead or alive. They prefer the lemming, a small 15 cm rodent, but if there is a shortage, they will switch to feeding on birds, insects, eggs, voles, ground squirrels and berries. In winter time they will search out meat caches stored by trappers, wolf kills or return to food stored during the summer hunting period. In coastal areas they hunt for small marine mammals, such as young seals, fish and carrion found along the shoreline. Those living near major sea bird colonies feast on eggs and birds including ducks and, if they can catch any, geese.

In March and April, before the end of winter, they begin to form mating pairs. Courting foxes communicate using a barking yowl; they also go through a playfield period of active chasing and play-fighting. Mating follows this lengthy courtship. Monogamous relationships develop and the pair remain together to find and prepare a den for raising their young. They frequently refurbish dens used by other generations of foxes. Some of these dens are many years old. Both parents-to-be do the renovations, often adding a new entrance. First litter births take place from late April through June after a gestation period of from 49-57 days. The average litter size is eight to eleven kits, depending on the availability of food, especially lemmings. The kits are born blind, covered with hair and weigh approximately 57 g each. The male will mate with the female again after the first litter is born. Kits are weaned after 5 to 6 weeks and the second litter is born in July or August. They leave the den at 14 to 15 weeks of age. Young foxes reach sexual maturity as early as
10 months of age.

The Arctic fox’s fur stands out as the animal’s greatest defense against the extreme cold. Seventy percent of its fur is fine, warm underfur which can be nearly 6 cm deep. They also have dense fur covering the undersides of their paws. A good supply of body fat, along with small ears, blunt muzzle, short limbs, and bushy tail providing a low surface area to volume ratio help to minimize heat loss. Veins and arteries traveling throughout the animal’s extremities are situated closer together than they are in most other animals. This arrangement conserves the blood’s warmth by transferring heat energy between out-going arteries and the incoming veins before it can escape through the outer extremities.

They use their voice most often during the breeding season but will also yelp to warn its young of danger. They also use a high-pitched, undulating whine when disputing territory with neighbouring foxes. They have excellent hearing and can locate the position of prey under snow. They live a communal, and when necessary, nomadic lifestyle, forming small bands when scavenging the countryside for food. However, to raise their young they occupy dens. Often the den has many entrances/exits for quick access. The male parent is a very attentive provider of food during the denning period and the female shares in the hunting after the babies are weaned. An average litter of eleven kits just starting to eat solid food requires about 30 lemmings or the equivalent in other food each day. This demand increases to over 100 lemmings per day until the kits leave the den 14 to 15 weeks after birth. Large litter size and rapid growth keep the parent’s very busy hunting for food.

Arctic foxes have few enemies other than humans. They are hunted for their pelts and land development results in habitat destruction. Wolves will hunt them if they can find and catch one. Birds of prey are a threat to whelps (young: between newborn and weaning). When their ranges overlap, the red fox will compete with the Arctic fox for den sites driving them out of the region. Once hunted for its fur, animal farms have been established in Alaska and Greenland. There are periodic “crashes” in lemming populations, which pose a direct threat to the Arctic fox. With a dwindling supply of these rodents, foxes are forced to abandon customary hunting areas in search of food elsewhere. During these times, fatigue, intense cold, and especially lack of food take their toll, especially on the young.